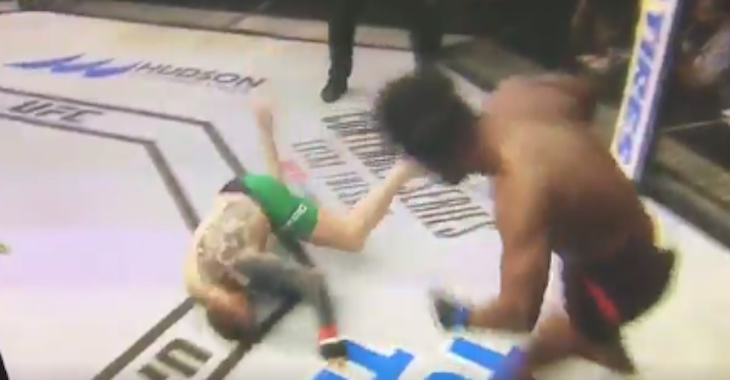 On Sunday night (Sunday afternoon in North America) the UFC returned to beautiful Glasgow, Scotland with UFC Fight Night 113. In the second bout of the televised prelims, in a welterweight bout between the debuting Galore Bofando and Ireland’s Charlie Ward, we witnessed a bizarre but truly impressive stoppage.

The stoppage occurred in the first round. After struggling to get a read on Bofando’s unpredictable kicks, Ward initiated a tie-up. Though he appeared to be the stronger man in this position, Bofando then whipped him to the ground with a throw, causing the Irishman’s head to rattle of the canvas. The impact was so severe that it knocked Ward out cold. Bofando’s volley of follow-up punches only served to seal the deal.

See the video of this jaw-dropping finish below:

See it from another angle here, followed by Bonfando’s acrobatic post-fight celebration.

With this outcome, Galore Bofando bursts into mainstream consciousness. We’ll be talking about him for days. He’s now 5-2 overall, and stands out as a definite face to watch in the stacked UFC welterweight division.