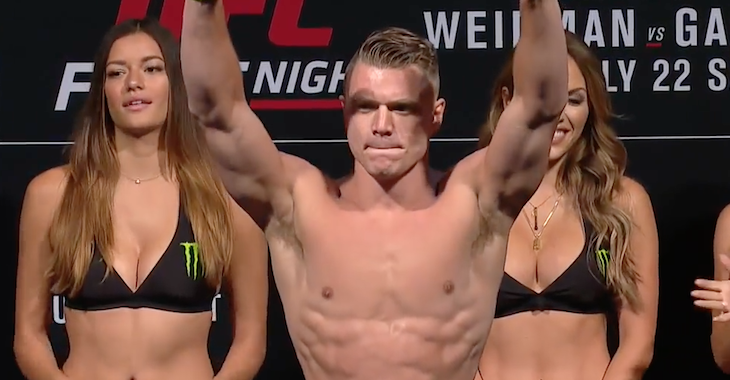 Round one begins and both men, Perez and Wade, trade body kicks early. Wade is applying a lot of forward pressure here. Chris shoots in for a takedown and presses Perez up against the cage. Wade continues to attempt a double leg takedown while trying to transition on to Perez’s back. Wade gets the takedown. He begins working some short shots. Perez scrambles and gets back up to his feet. Wade immediately drags Frankie back down to the floor. Perez again scrambles and is able to get back up. He presses Wade against the cage now and begins searching for a takedown attempt of his own. He gets it after scoring a trip. Frankie working some shots from top position now. Wade is able to scramble and get back up to his feet. He scores a throw and winds up on top. The horn sounds to end round one.

Round two begins and once again both fighters start off by landing body kicks. Wade follows up with a low kick and then Frankie misses with an attempted high kick. Perez leaps in with a jab and then just misses with a spinning back kick. Wade presses forward but misses an attempted takedown. He partially lands a front kick on Frankie and then shoots in once again. This time Chris is successful in getting Frankie to the floor. The fighters lands in an awkward position but Wade eventually transitions to side control. Frankie is able to scramble back to guard and then works his way back up to his feet. Chris still has Frankie pressed against the cage. Round two comes to an end.

Round three begins and Frankie lands a stiff jab to start. Wade presses forward and lands a kick. Perez replies with one of his. Frankie with another jab. Wade shoots in and presses Frankie against the cage. Perez shakes him off and then lands a low kick. Wade throws a kick but Frankie ducks under it and scores a takedown. Chris looks to lock up a guillotine choke and uses the hold to transition in to top position. Good stuff from Wade there. Wade begins working some short shots from top position. Frankie looks to scramble and is able to get back to his feet. One minute remains. Frankie goes for a high kick. He then lands a well times knee as Wade was shooting in. Chris continues to press for a takedown. Perez with some hard strikes from the top. Round three comes to an end.