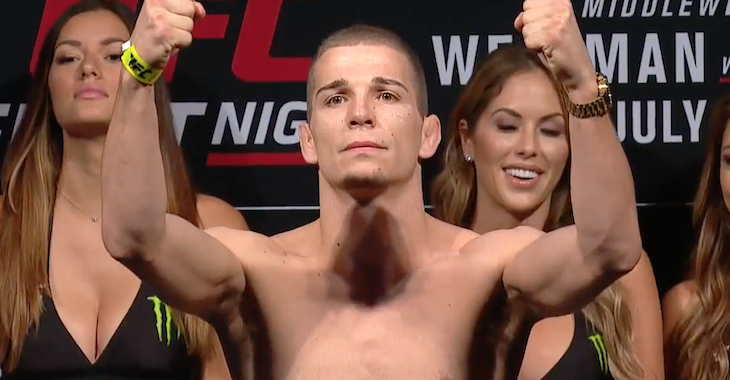 Round one begins and Bochniak throws a wild hook. Kennedy ducks under the strike and scores a takedown. Kennedy begins working from full guard. Kennedy with some decent shots from the top now. He works in an elbow. Bochniak tries to scramble but Kennedy won’t let him. More shots from the top by Kennedy. Bochniak scrambles and this time is able to get back up to his feet. After a brief battle along the cage the fighters break. Kyle misses with a hook. Jeremy connects with a pair of knees and then shoots in and scores another takedown. Round one comes to an end.

Round two begins and Bochniak lands a nice hook to start things off. Kennedy circles and then shoots in for a takedown. He gets it and begins working from full guard. Short shots and elbows from the top by Jeremy. Kyle attempts to scramble up to his feet but Kennedy just plants him back on the floor. More shots from the full guard by Kennedy here. Kyle scrambles and this time scores a sweep to get back up to this feet. The position is short lived as Kennedy shoots right back in on another takedown and gets it. After some short strikes by Kennedy, round two comes to an end.

Round three begins and Kennedy misses with an early head kick attempt. Bochniak presses forward with a left hook followed by a right hand. Kennedy shoots but Bochniak sprawls and defends the shot. Bochniak with a right hand and then another. That looked like it hurt Kennedy. Bochniak with a nice left followed by a right high kick. Kennedy tries to come forward but eats a right hand from Kyle. Bochniak goes low with a kick and the referee steps in to stop the action. After Bochniak recovers we restart. Jeremy circles and then shoots in for a takedown. He gets it. He begins working some good left hands from top position. Bochniak is in a bad spot here. Jeremy has him pressed against the fence. Kyle scrambles but Kennedy slams him right back down. Round three comes to an end,