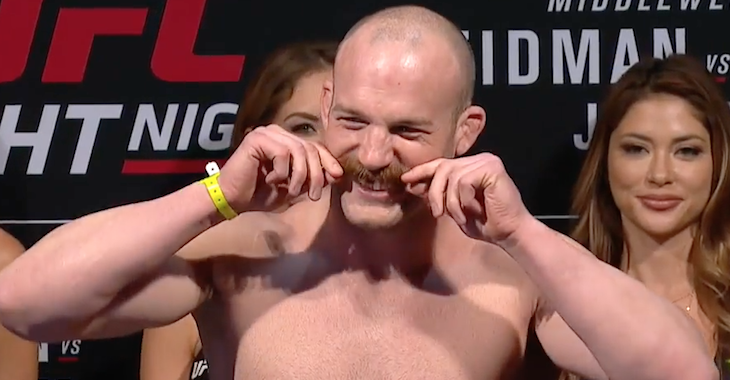 Round one begins and Cummins quickly presses the action and forces Gian against the fence. Villante breaks free and Cummins quickly presses forward with another shot. Villante defends and lands some big hammer fists. The fighters break and Gian lands a big right hand. Another right hand from Villante and Patrick is hurt. Another big right hand from Villante and Cummins is in all sorts of trouble. Patrick shoots in for a takedown but it is not there. The referee steps in as cut was caused on the head of Cummins after an accidental head butt. We continue and Cummins shoots in for a takedown. It is not there. He circles and lands a nice left hook. A nice jab now from Cummins. He shoots in for a takedown but the shot is defended by Villante. Cummins presses forward and pushes Gian against the cage. He works in a nice right hook. Cummins with some knees in the clinch now. They break and Cummins lands a left hand. Villante with a right jab but Cummins ducks under and presses him up against the fence. Round one comes to an end.

Round two begins and Cummins is busted up but continues to press forward. He shoots in for a takedown but Villante defends. Cummins is working his left jab and hook well here. He is arguably out striking Gian now. Cummins presses forward and pushes Gian against the cage. He lands a couple of shots inside before they break. Cummins presses forward with a combination. He connects with a nice left hook. Gian responds with a good right. Another nice combo from Cummins. Villante circles and lands a low kick. Cummins shoots in and pushes Gian against the cage. He lands a left hand and Villante circles away. Round two comes to an end.

Round three begins and Villante lands a nice right hand. He needs more of that. Cummins comes forward but Gian catches him with an uppercut. That appeared to hurt Cummins. Patrick shoots for a takedown but it is not there. Gian with a nice jab now. Cummins comes forward with a left hand but eats a counter uppercut. Both men score with left hand. Cummins leaps in with a right hand. It lands. He continues to press forward and lands a left hook. Villante is breathing heavy now. Cummins with a right hand. Two minutes remain and Patrick lands a nice left. He follows that up with two nice right hooks and Gian appears to be hurt. Cummins presses him against the fence. Patrick begins working some knees. The fighters break and Cummins lands a nice right hand over the top. He is walking down Gian now. Still, Villante is able to counter with a nice right. Gian presses forward with a combination as the horn sounds to end round three.