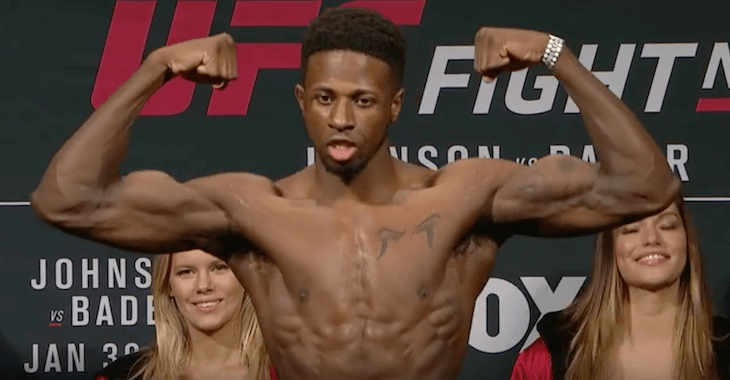 A welterweight fight between Matt Dwyer (8-4 MMA) and Randy Brown (7-0 MMA) served as the third bout of UFC on FOX 18 in New Jersey.

Both welterweights start off by trading single shots. Dwyer lands a decent right hook. A leg kick lands for the Canadian as well. Big right hand lands for Dwyer. He’s pawing with the jab and swinging the big overhand. Brown looks tentative to start. He’s struggling to find his range against Matt. Good inside leg kick from Dwyer. Some good front kicks from Brown. He follows up with a jab. Nice leg kick lands for Dwyer and another. Head kick misses for Dwyer. Round one comes to an end.

Round two starts off with a flurry of strikes by both men. Nothing lands flush. They exchange leg kicks. Brown presses forward but Dwyer grabs the clinch. The referee eventually steps in to break them up after a lull in action. Big right hand from Brown. He’s backing Dwyer up. Submission attempt from Brown, it looks tight but he eventually lets go. Back against the fence and both fighters are battling hard in the clinch. Dwyer shoots for a takedown and gets it. Brown gets back to his feet but Dwyer has him pressed against the fence. Good elbows from the top land for Brown. Round two comes to an end.

Round three begins with what looks like an eye poke by Brown but the ref doesn’t see it. Brown shoots in and scores a takedown on Dwyer. Matt scrambles and is able to take the back of Brown. Randy fights out of the position and the fighters return to their feet. The fighters are back up against the fence and battling in the clinch. Brown lands an illegal knee and has a point deducted. We start back up and Dwyer lands a body kick. Big shots returned by Brown. Randy lands a takedown. Randy looks to secure a D’arce choke but Dwyer is defending well. Browns lets the chokehold go. Good elbows from the top for Brown as Dwyer looks to score a takedown. More elbows from Brown. The fighters trade shots as the final bell sounds.