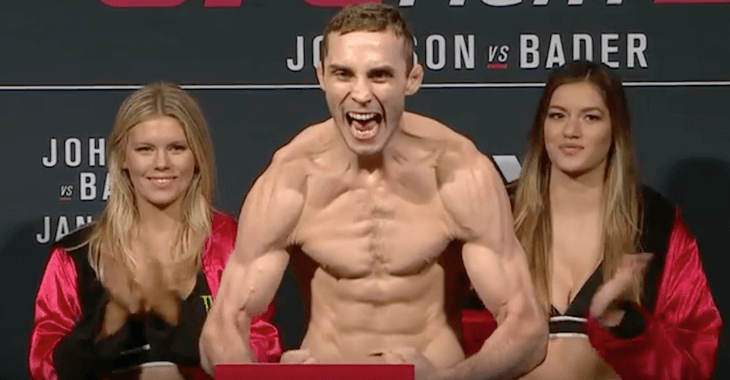 Both men start the fight by firing off leg kicks. Solid leg kick lands for Olivieri. And another. Martin rushes in for a takedown and gets it. Felipe gets back to his feet but seconds later Martin forces him down to the canvas. Olivieri scrambles and gets back to his feet but Martin keeps him pressed against the fence. The referee separates the fighters and Olivieri immediately lands a brutal leg kick to the thigh of Martin. Solid elbows land in the clinch position for Felipe. The Brazilian lands a good combo to close out round one.

Round two begins and Olivieri lands another big leg kick. Two more leg kicks from Felipe. Martin really needs to start checking these. Martin is pushing forward and begins to land some decent shots. Good leg kick from Martin. Olivieri responds with a jab and then a leg kick. Good right hand lands for Martin. More solid shots from Martin who lands a good uppercut. Felipe lands a good jab. Nice right hand from Martin. And another big right lands for Martin. Big flurry from Martin and Olivieri is hurt. He shoots in for a takedown but doesn’t get it. Round two comes to an end.

Olivieri begins round three by landing some hard leg kicks on Martin. Tony responds with a right hand. Good combo lands for Martin. Felipe returns fire with a leg kick. Martin shoots in for a takedown but it’s stuffed by the Brazilian. Martin keep pressing, he has Olivieri against the fence and takes him down. Martin moves to half guard and starts landing shots. Olivieri gives up his back. Martin has both hooks in and a deep rear-naked choke. Olivieri goes to sleep and this one is over!

Tony Martin defeats Felipe Olivieri via submission (rear-naked choke) at 3:02 of round 3