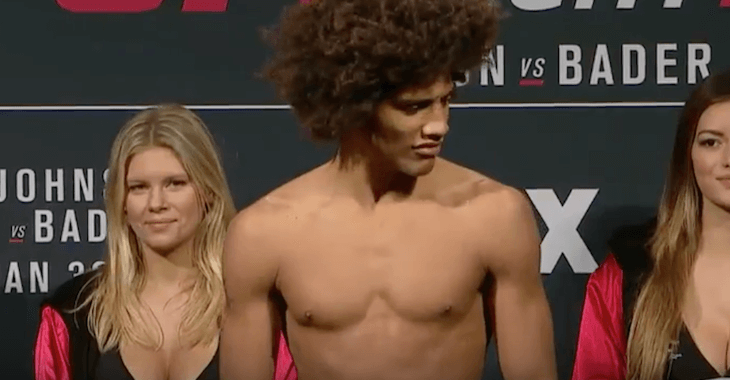 A featherweight bout between Alex Caceres (11-8 MMA) and Masio Fullen (10-6 MMA) kicked off the UFC on FS1 prelims tonight in New Jersey.

Caceres starts off the fight by throwing a head kick. Fullen responds with a body kick. Good side kick from Masio. Caceres is applying the pressure and lands a good leg kick. Spinning back kick attempt from Alex. Good left hook lands for Masio. Good knee inside from Caceres. He tries to go upstairs with a head kick but misses. Spinning back kicks from both fighters. Fullen just misses with a high kick. 90 seconds remains. Alex lands a huge kick. Masio is hurt. Caceres goes after him and presses him up against the fence. Takedown lands for Caceres but Fullen hops right back up. Good knee from the clinch by Alex. Another knee lands to the body as they break. Good leg kick from Fullen and he follows up with a stiff jab to end round one.

Round two begins and Caceres starts off with a good leg kick. Fullen responds with a right hand. Good kick to the body from Fullen. Caceres responds with one of his own. Spinning back kick lands for Masio. Good left hand from Caceres, who is controlling the center of the octagon. Good leg kick from Masio. Caceres responds with a leg kick and then a head kick. Another leg kicks from Alex. Masio responds with one of his own. Back to back knees from Caceres. And another one lands hard to the body of Masio. The fighters engage in the clinch. Good shots from the inside by Alex. Knees and punches are landing for Caceres. Round two ends.

Round three begins and Fullen charges out with punches that miss their intended target. Caceres with a leg kick and another. Fullen responds with a kick of his own. Good uppercut from Alex and then a jab. Caceres lands a leg kick then misses with a hook kick. Another leg kick lands for Alex. The fighters trade punches. Caceres is applying all the pressure here. He lands a leg kick and tries for a takedown but misses. Good high kick from Alex. Caceres lands a knee and then another high kick. Fullen looks to be hurt. Masio with a big hook that pushes Alex back. Caceres steps in to the pocket and lands some huge shots. Fullen is again in trouble. 15 seconds left. Caceres with more punches in bunches. Side kick lands before the bell sounds to end the fight.