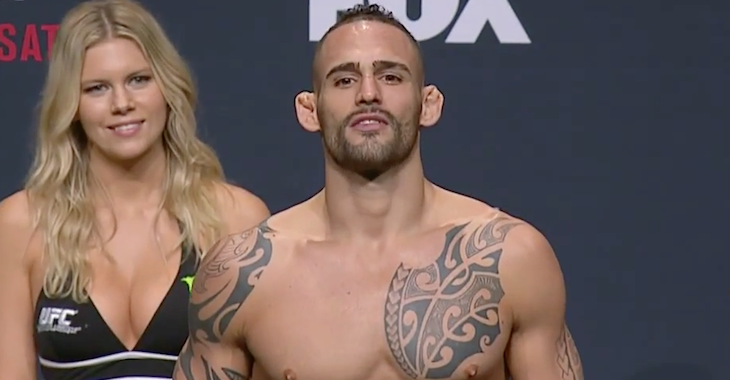 A welterweight bout between Santiago Ponzinibbio and Nordine Taleb served as the featured bout of tonight’s UFC Fight Night 105 event in Halifax, Canada.

Round one begins and there is a bit of a feeling out process as both men try and find their range. Taleb with a jab and then a body kick. Ponzinibbio circles but Taleb catches him with a left. Santiago lands a nice leg kick. Both men trade jabs in the center of the cage. Ponzinibbio throws a kick but Taleb catches it and presses Santiago up against the cage. Hard shots from Taleb. He lets go of the leg and Ponzinibbio circles out. Santiago lands a nice left jab. Taleb responds with a nice right hand followed by a kick. Santiago leaps forward with a jab and then another. Taleb responds with a pair of kicks and a right.

Round two begins and Taleb lands a pair of kicks to start. Ponzinibbio presses forward but Taleb circles and lands two more kicks and then a jab. Another hard kick from Taleb. Santiago with a right and then a kick of his own. Taleb presses forward and lands another two kicks. Ponzinibbio with a good jab and Taleb’s nose is bleeding. The Canadian lands a hard leg kick but Santiago comes back with another jab. Taleb continues to circle well and lands his kicks. Santiago lands another jab followed by a leg kick. Two minutes remain. Ponzinibbio with a big right that sends Taleb to the floor. Santiago jumps on him but Taleb pulls guard in an attempt to recover. A nice elbow lands for Santiago. He moves to half guard. Taleb is doing a good job of defending here. Round two comes to an end.

Round three begins and Ponzinibbio lands a kick to start. Taleb replies with one of his own. The referee steps in and warns Taleb about having his fingers pointed out. We restart and Ponzinibbio lands a left and then a right. He follows that up with a jab. Taleb scores with a leg kick but gets countered by a left jab. Taleb with a pair of kicks to the body now. Ponzinibbio leaps in with a left. Taleb replies with a low kick but Santiago stays on him and lands a combination. Another good left jab finds a home for Ponzinibbio. He scores with a head kick and then another left jab. Taleb fires back with some low kicks but those aren’t going to be enough. Good boxing here from Santiago. Taleb lands a hard leg kick that buckles Ponzinibbio. He comes in with strikes. Ponzinibbio circles and fires back with a combination. Both men get clipped hard late. This one is going to the judges folks.

Was anyone's fight in the last seconds of the round! Who you got? #UFCHalifax pic.twitter.com/0D6KDLarn8