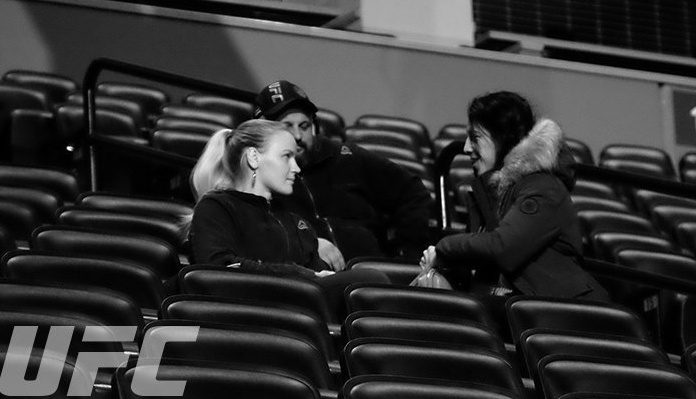 It would have been a surprise if the UFC didn’t go ahead and make this bout next atop the flyweight division, and here it is.

Heading into UFC 228, Nicco Montano was the inaugural flyweight champion after winning her title as the underdog on season 26 of The Ultimate Fighter. Unfortunately for Montano, there were complications with her weight cut preparing for her first title defense against Valentina Shevchenko.

Montano would be hospitalized after having issues with her kidneys that led to the bout’s cancelation. On top of that, the UFC went ahead and stripped Montano of her title.

The UFC would confirm that Shevchenko would still be getting a crack at the vacant title, the question just turned into who against?

That question now has its answer as the UFC has confirmed that Shevchenko will fight over the vacant crown against the former champion at 115-pounds, Joanna Jedrzejczyk at UFC 231 on December 8.

Jedrzejczyk last fought in July when she defeated Tecia Torres by unanimous decision in her first three-round bout since 2014. The win also acted as Jedrzejczyk’s rebound after two back to back losses to Rose Namajunas.

For Shevchenko, her last fight was also a rebound victory after she tasted defeat in a razor-thin decision loss to the bantamweight champion Amanda Nunes. However, Shevchenko’s victory was her return to the 125-pound weight class as she thoroughly dispatched of the Brazilian newcomer, Priscila Cachoeira.

The flyweight division is the newest weight class in the UFC at the moment and things are starting to pick up. The history between these two dates back to their days in Muay Thai where they fought on three different occasions. All of which Shevchenko came out victorious in.

When initially thinking of this bout a year ago, many hoped it would be a champion vs champion super fight. Instead, we get the next best thing with them fighting over the 125 strap.