Alex Oliveira suffered one of the nastiest cuts in recent memory during his fight with Gunnar Nelson last night at UFC 231 in Toronto.

“Cowboy” had a strong opening few minutes, but the tide would ultimately swing in the favor of Gunnar Nelson in round two.

After scoring a takedown, “Gunni” was able to split Alex Oliveira wide open with a thunderous elbow.

Immediately following that strike, Oliveira’s forehead began bleeding so profusely that it looked like a running faucet.

After a scramble, Gunnar Nelson locked in a rear-naked choke which forced Alex Oliveira to tap out.

Shortly following the conclusion of last night’s UFC 231 event, MMAFighting shared the following photo of Alex Oliveira getting stitched up by doctors.

“Cowboy” required a total of twenty-nine stitches to heal is wound. 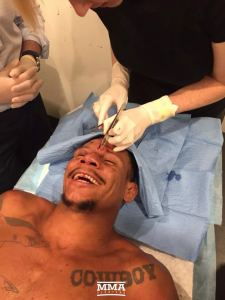 The setback snapped a two-fight winning streak for Oliveira.

As for Gunnar Nelson, the 30-year-old has now won three of his past four contests overall, with all three of those victories coming by way of submission.

Who would you like to see UFC 231 combatants Alex Oliveira and Gunnar Nelson fight in their next octagon appearances? Sound off in the comments section PENN Nation!