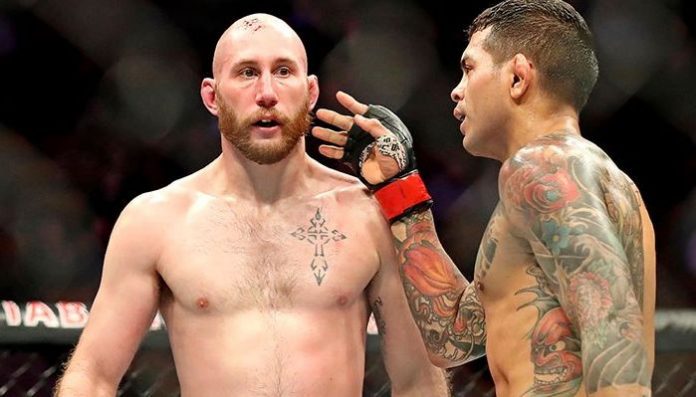 Canadian Kyle Nelson will indeed be a UFC fighter for the foreseeable future.

Nelson stepped in on short notice to fight Diego Ferreira at UFC 231. However, he lost the fight in the second round by TKO. Even though he lost the fight, Nelson was satisfied with his performance.

“I think it showcased some of my skills,” Nelson said to BJPENN.com. “When I was fresh in the first round, everything was working good with my footwork, hand speed and my power. I was kind of picking Diego apart and landing with some solid, solid punches to the head. Then, a good kick to the body, good kick to the head. I was hurting him on the feet. With all the footwork I was able to avoid the takedowns, and anytime he got close I was able to scramble out. It was close to the end of the first round when the adrenaline dump hit. That was something I have never experienced before, I am always in good cardio shape. I’ve run triathlons and I have never felt that.

“I was talking to some nutritionists. They explained it as basically, as soon as I got the phone call on Tuesday night, even though I didn’t notice it, my nerves would have been running high. My adrenaline would have started Tuesday night. We were so busy all the days leading up to the fight, to all the contracts, media stuff, that my adrenaline would have been running at 110 percent, basically all the way up to the fight. It wasn’t until I was in the fight, I started landing punches and I realized I might knock this guy out. All of the sudden, my body got comfortable and as the adrenaline stopped, everything kind of shut down. I have never been that tired before, it wasn’t a cardio thing it was my body went through so much.”

Although Kyle Nelson lost the fight, the UFC was thankful he took the fight on short notice. As a result, they will be keeping him around. Nelson signed a four-fight deal, but he did think he could be cut after the fight, but after talking to Dana White and Sean Shelby, he learned that will not be the case.

“Yes, we signed a four-fight deal,” Nelson said. “With the UFC they have the option to cancel the contract at any time. We weren’t 100 percent sure what was going to happen after that fight. We assumed that because we took the fight on short notice that they would be thankful and give me a second fight. Right when we finished the fight, Dana White came back and said thank you, and shook my hand. Sean Shelby came back too and said what a great job I did and thanks a lot for taking the fight. And, as soon as I am ready to go let him know and he will get me another fight.”

This means that Nelson will not be a one-off in the UFC. He will get a chance to fight in the Octagon again and try and get his first UFC win. For him, that’s a very exciting notion.

“It is awesome and nice to say I am a UFC fighter now,” he said. “It is hard to say if I had walked into the Octagon and got beat up and wasn’t able to showcase my skills, who knows if they would have brought me back. With the striking I showed and the entertainment value with standing up and trying to call Diego up and back onto the feet. I think the crowd liked it and the UFC liked it. It is nice that they want me back. They know I am an entertaining fighter and I have the skills to knock people out.”

Although Nelson fought at lightweight, he is a natural featherweight and will be heading back down there for his next fight. Nelson would like to return as soon as possible and make the most of his UFC contract. He worked his whole life to get to the UFC. Now, he can finally say he is a UFC fighter.