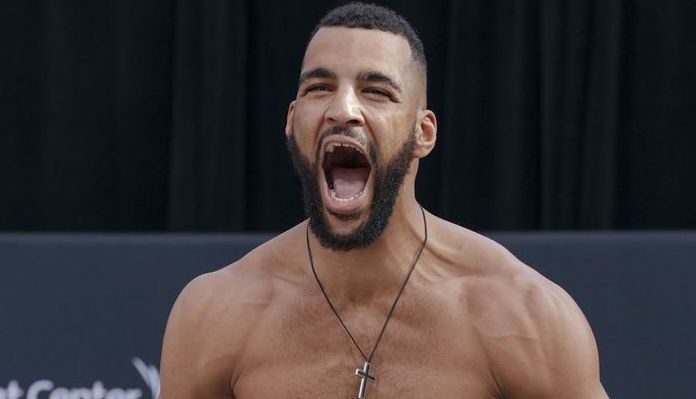 Devin Clark will be fighting inside the Octagon very shortly at UFC 231 on December 8 in Toronto against Aleksander Rakic, who is currently 2-0 in the UFC. While both Clark and Rakic are currently unranked, the fight should bring fireworks as both have knockout power.

However, even though the fight should be a fun one, it isn’t one Clark wanted. After working his way up the UFC light heavyweight rankings, Clark wanted a bigger name, but when none were offered, so he had to settle for Rakic.

While Clark thinks the matchup favors him, he also realizes it poses a bit of a threat. Rakic has good striking, but for the South Dakota native, he isn’t worried about it.

“Everyone thinks he’s just gonna kill me just because he has a little bit of striking,” Clark added, “But, we all know you need little more than some striking. I think I match up real well, I just got done watching a little bit of video on him again and I don’t think he’s ready for what I can deliver in the cage.”

While Clark is confident that Rakic isn’t ready for what he can do in the Octagon, something Clark will have to be nervous about is the fact that Rakic is so tall. The Austrian native is 6’5″ and has a reach of 78″. Compare that to Clark’s height of 6’0″ and 75″ inch reach. Rakic will go into the fight looking to keep his distance and utilize his reach, but Clark knows he can close the distance fast.

“Absolutely, that range kind of goes out the window when you got [a] guy like me that can close the distance and do it in a very quick fashion. Obviously, I have to watch out [a] little bit more for his counter punches because he’s a really good striker. That’s an easy thing to be aware of.

“And another thing, I train with tall people, I have few guys that are 6’3″ plus and I train with Giant Jones, he’s got the range, he’s got the biggest range. I’m not all that concerned about that. My last opponent, he was 6’3″, 6’4″ even he had like 82-inch reach or something like that. That was a thing that came into factor in that fight and but I was able to deal with it with my wrestling and closing that distance.”

Clark seems ready for his fight on December 8, and it couldn’t come soon enough for him. While Rakic is a tough opponent, with a win Clark may start seeing some ranked opponents come his way.