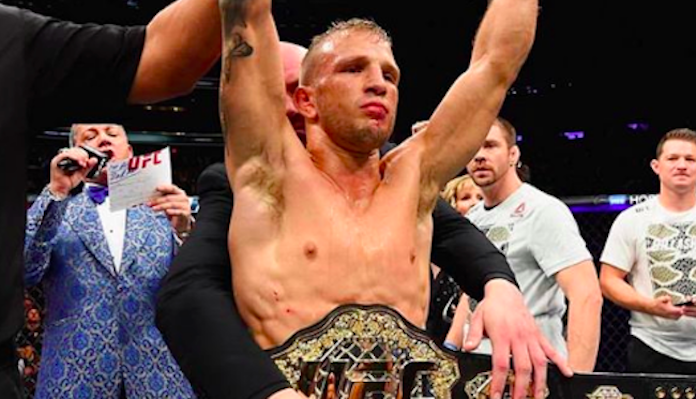 The former teammates turned bitter rivals, Cody Garbrandt and TJ Dillashaw first met at November’s UFC 217 event in New York. After being dropped in the first-round, Dillashaw would storm back to earn an impressive knockout victory in round two.

The fight announcements have now been made and we are ready to begin the UFC 227 main event.

Round one begins and Cody comes forward early. He throws a high kick which is blocked by Dillashaw. TJ is smiling. Cody comes forward with another high kick. Dillashaw misses with a low kick. Cody comes forward with a front kick that misses. TJ lands a jab followed by a low kick. Cody circles out and then takes the center of the octagon. Dillashaw with a kick to the body. Cody lands a nice punch that sends TJ backwards. Dillashaw leaps in with a spinning back fist that misses the mark. He lands a low kick. Both men start swinging wildly. TJ lands a big punch and then another that drops Cody. TJ hops on him and takes his back. Cody is holding on to TJ’s gloves and then scrambles back up to his feet. Dillashaw stays on Cody he appears to still be on wobbly legs. Another right hand from TJ and Cody is rocked. He’s back up against the fence and TJ begins unleashing a plethora of strikes. This is close to getting stopped. Somehow Cody is still on his feet. A big knee and more punches. The referee finally steps in and stops it.