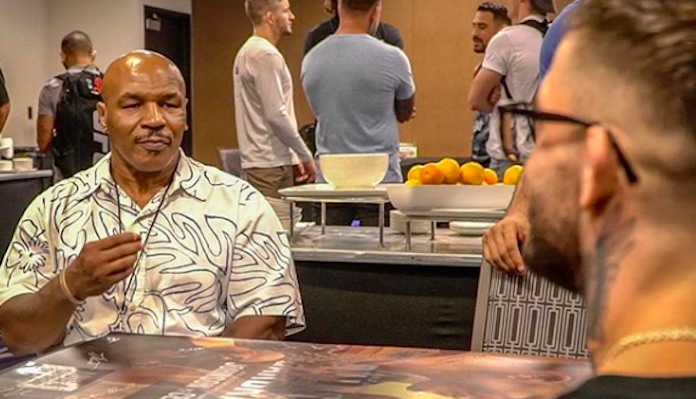 Back in November, in the co-main event of UFC 217, Cody Garbrandt surrendered the UFC bantamweight title to his arch rival TJ Dillashaw, succumbing to a second-round punch. This Saturday night, in the main event of UFC 227, Garbrandt will attempt to reclaim that title from Dillashaw in an immediate rematch.

It’s a monumental challenge for the young Team Alpha Male representative, and one that will bend the immediate trajectory of his career for better or for worse.

Apparently, Garbrandt has received some advise from boxing legend Mike Tyson with respect to this upcoming challenge.

“To cherish the belt this time, when I get it,” Garbrandt told ESPN’s Ariel Helwani. “That’s what he said. You’re going to love it so much, you’re going to have a newfound respect to be world champion once you reclaim this title.”

Garbrandt also explained how he became friends with the former boxing champion Mike Tyson. Apparently, their relationship began when manager Ali Abdelaziz introduced Garbrandt to a movie producer, who in turn introduced him to Tyson.

“Ali introduced me to a movie producer, and they were friends,” Garbrandt said. “That’s how we kind of got connected with Mike, and we’ve been friends for a few years now.

Tyson, of course, is also a friend of UFC President Dana White.

Do you think Cody Garbrandt can reclaim the bantamweight title in the main event of UFC 227 this Saturday night in Los Angeles?