The date was September 21st 2016 and the infamous two word Tweet “Beg me” rang out in the MMA community like two warning shots out of a 12 gauge shotgun.  Conor McGregor was on top of the mixed martial arts world and was seeking a second UFC title, this time in the promotions lightweight division. “Mystic Mac” would ultimately score a second-round knockout over then 155-pound champ Eddie Alvarez to become the first UFC fighter to hold two belts simultaneously.  “The Notorious” would go on to relinquish his featherweight title late November 2016.

Flash forward to the present and McGregor is in a much different position than he once was.  He recently was stripped of his lightweight title earlier this month.  Once Khabib was able to make weight for his UFC 223 appearance against last minute replacement Al Iaquinta the belt was stripped and a series of events took place that may have created issues for a fight with “The Eagle” before this year is through. 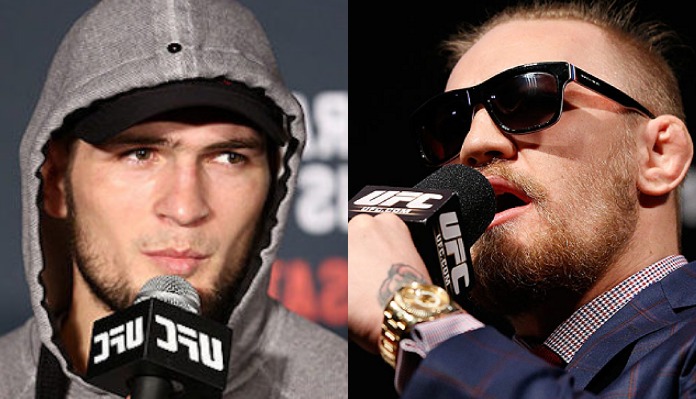 The new champ, Khabib, told fans at a recent Q&A (h/t Jim Edwards of MMANytt) that he isn’t willing to wait until next year to fight ‘The Notorious’.

“We’re talking, but if it takes too long, I don’t want to do that,” Nurmagomedov said. “If he wants to fight this year, then we can fight. Otherwise, I don’t know. We won’t wait long. I want to fight Conor and if he can fight, I will fight him.”

With so many unfortunate injuries that have plagued Nurmagomedov through the years it only makes sense why a (healthy Khabib) wants to stay busy and defend his belt.   As for McGregor, his legal problems stemming from the Barclays Center bus incident now involve fighters Michael Chiesa and Ray Borg who were injured in the attack and may now play a factor in Conor’s return.

Will Khabib defend his title against “The Notorious” one?  Or will “The Eagle” land former interim champion Tony Ferguson or surging contender Dustin Poirier before the year is through?