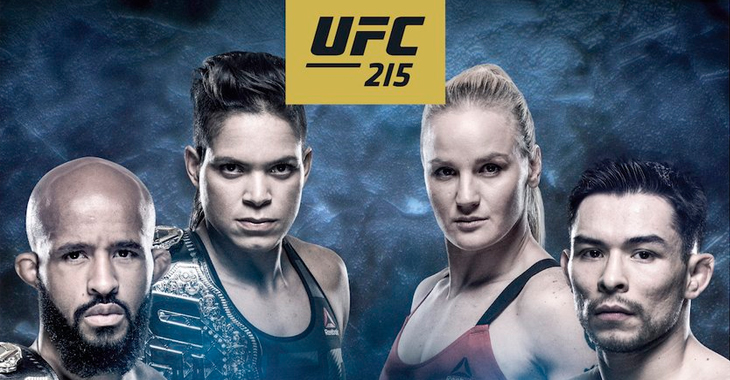 The UFC will invade Edmonton, Alberta, Canada next weekend for UFC 215.

This is it, folks. This is one of the reasons he declined a fight with T.J. Dillashaw. “Mighty Mouse” will attempt to make UFC history at the event by breaking the record for the most successful title defenses by a UFC champion with 11, beating out Anderson Silva. Johnson was last seen in action at April’s UFC on FOX event, where he scored a third-round submission victory over Wilson Reis.

As for the “Tazmexican Devil”, Ray Borg has strung together back-to-back decision victories over Jussier Formiga and Louis Smolka.

In the co-main event of UFC 215, women’s bantamweight champion Amanda Nunes will look to earn her second title defense when she rematches top division contender Valentina Shevchenko. “The Lioness” and “The Bullet” first met at UFC 196 in March of 2016, with Nunes emerging victorious via a close judges decision.

Nunes and Shevchenko were initially booked to rematch at July’s UFC 213 event in Las Vegas. Unfortunately for fights fans, Nunes fell ill in the days leading up to the fight card and was forced to withdraw from the event entirely.

Amanda Nunes was last seen in action this past December at UFC 207 in Las Vegas, where she earned a first-round TKO victory over former title holder Ronda Rousey.

As for Shevchenko, “The Bullet” is coming off a submission victory over Julianna Pena which she earned at January’s UFC on FOX event in Denver.

Check out the full UFC 215 pay-per-view lineup below: