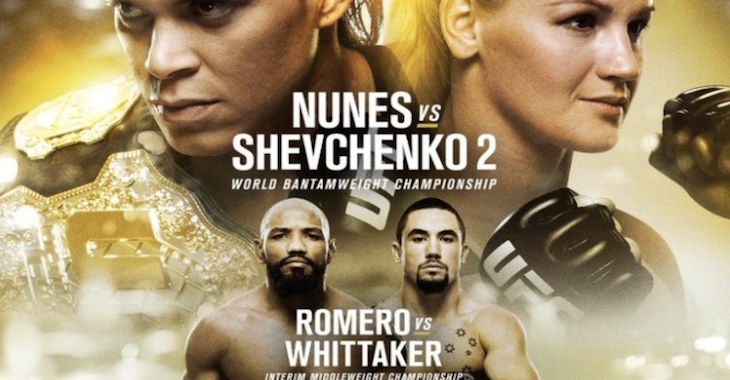 The UFC 213 broadcast schedules are set as the event approaches on July 8 at the T-Mobile Arena in Las Vegas, Nevada.

UFC women’s bantamweight champion Amanda Nunes will look to defend her title for the second time against Valentina Shevchenko in the pay-per-view main event. This will be a rematch between the two bantamweight rivals as they first met in a three-round non-title fight at UFC 196 back in March of last year where Nunes was able to outpoint Shevchenko to take a unanimous decision win.

The co-main event of the evening will feature a UFC interim middleweight title fight between Yoel Romero and Robert Whittaker as undisputed champion Michael Bisping is out with an injury. Romero is riding an eight-fight UFC winning streak and last finished former middleweight champion Chris Weidman at UFC 205, which took place in November. Whittaker is riding a seven-fight UFC winning streak and is coming off an impressive TKO stoppage over Ronaldo “Jacare” Souza. Another fight fans are surely looking forward to features former UFC welterweight champion Robbie Lawler vs Donald Cerrone in what many are expecting to be a slugfest. This is Lawler’s first fight back since losing the welterweight title to current champion Tyron Woodley at UFC 201, which took place in July of last year. Cerrone is also coming off a loss to Jorge Masvidal, which happened at UFC on FOX 23 in January. Prior to the fight against Masvidal, “Cowboy” racked up four straight wins in the welterweight division after moving up from lightweight.