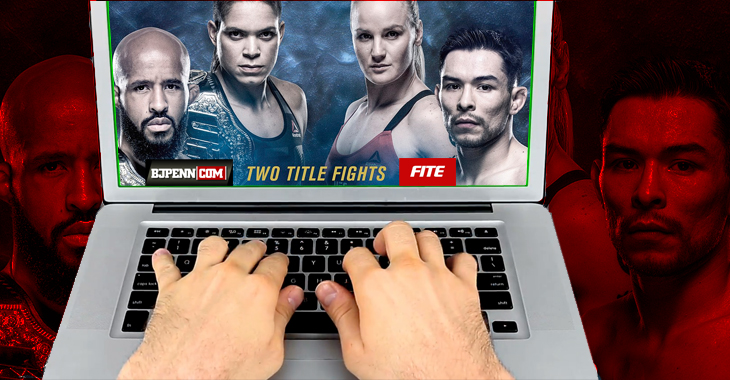 This weekend, Amanda Nunes will attempt to hold on to her UFC bantamweight belt against Valentina Shevchenko. Demetrious Johnson will headline the event against Ray Borg to also defend his flyweight strap and try to make history by beating the title defense record. That alone makes UFC 215 sort of special, but there is another reason why this UFC 215 card won’t be like any other. For the first time ever, FiteTV will partner with BJPenn.com to stream the pay-per-view directly on our site.

Thanks to the wonders of the internet, there are tons of places where you can watch your favorite combat sports. However, there’s only a couple of places you can stream UFC 215 and chat with UFC welterweight Carlos Condit. The former UFC welterweight title challenger will be in the FiteTV’s chat section, talking about the fights as they happen live. If you want to join us, everything will be in one place right here.

Another good thing about FiteTV? It’s just not the UFC. They have an enormous schedule that brings combat sports from around the world year-round to your laptop and other streaming devices. It will also be the official stream for RIZIN’s upcoming Japanese MMA event in October for their bantamweight grand prix. So, there’s a lot more reason to sign up than to just watch UFC 215 with us. Watch Carlos Condit break down the UFC 215 card below and come back here to watch the event LIVE with us and FiteTV. As you can see up top, there’s a countdown to UFC 215 and it will stream on the night of the event in this post.

Check out the #UFC215 main card analysis I did with @FITETV https://t.co/QTX1i3QLxk then join me in live chat for the PPV