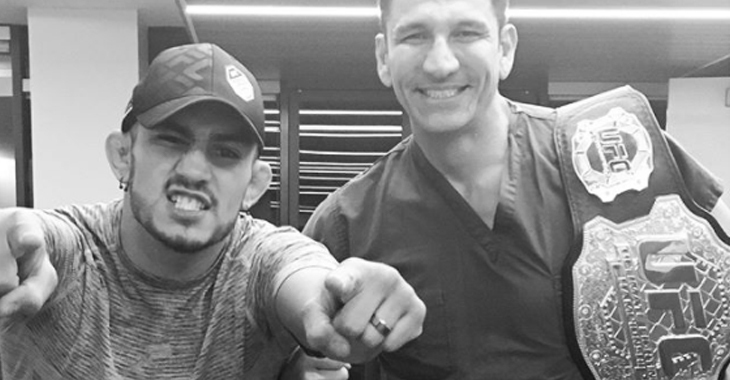 Just a couple of days ago, it was made known to the world that Tony Ferguson underwent surgery on his elbow and his return to the Octagon was up in the air. The info was released by his wife on her private Instagram account, but the news quickly proliferated all the outlets asking what this meant for the lightweight division. But fear not, Ferguson took to social media today to give an update on his health. Not only will he be returning sooner than expected but he drops the bomb than when he does come back, it will be against none other than Conor McGregor to unify the UFC lightweight title. “Keep em’ sharp, so I asked doc if he could make my elbows any more sharper. Well, with a wink and a nod it was done. T’was a very minor surgery and now I’m getting ready to unify my belt with McNuggets [Conor McGregor] in the first quarter of the year (March – April) as recovery is going great. Defend or vacate, motherf-cker. The first day of therapy was huge, I never liked sitting on the sidelines. Repair Sports Institute almost got me to full flexibility and next is strength. Thanks Doctor Mora, Dana White and the UFC for the Orthosccope. It was a success. Great job. I look forward to kicking McNugget’s ass and defending my strap for a decade or two. And the new.” — Tony Ferguson via his Instagram.

It looks like the UFC may have a bidding war on their hands. Tony Ferguson says that he’ll be fighting McGregor in March or April, but Manny Pacquiao just said he’s in talks to do the same thing on the same dates. While none are official yet, we now know that both of these fights are possible if McGregor wants them. The UFC will have to fork over a bigger share of their pie to entice the Champ Champ to keep fighting in the Octagon. If not, it’s clear McGregor is holding the threat of a giant boxing match over their head.

All The Money In The World, But You Still My Bitch @TheNotoriousMMA #DefendOrVacate Son. My Mat MF’er 😎🖕🏽-Thee Champ