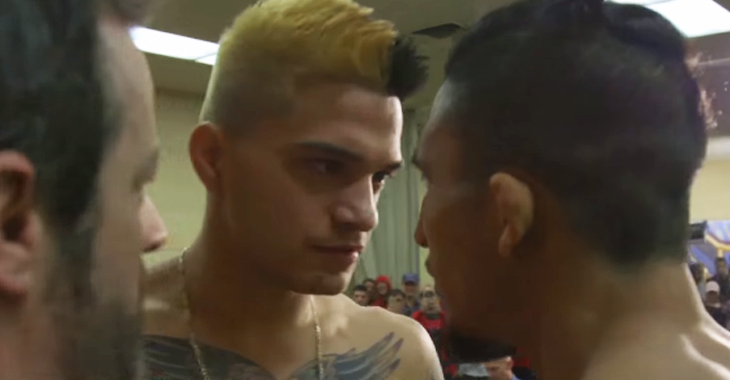 The fights at UFC Fresno are mere hours away, but that didn’t stop two fighters from nearly throwing down at the weigh-ins last night. Albert Morales and Benito Lopez will crack open the main card but the started early yesterday. Things started off innocent enough, until Morales feinted and barked at Lopez. The fighter gave Morales a shove in reaction for it and now the California State Athletic Commission has fined him as reported by MMA Fighting.

The talk is over… Tomorrow night I’m coming for your soul! #TeamAlphaMale #530 #916 pic.twitter.com/QlLbqYK1zW

“Benito Lopez shoved Albert Morales at UFC Fresno weigh-ins Friday and got docked a portion of his fight purse for the infraction. The California State Athletic Commission (CSAC) fined Lopez $1,000 — 10 percent of his fight purse — for the physicality with Morales during their staredown at official weigh-ins, commission executive officer Andy Foster confirmed with MMA Fighting. MMAjunkie was the first to report the news.”

While we’ve seen things like this go down before and even altercations way worse than this go unpunished, the CSAC has a zero tolerance policy for physical contact outside of the boundaries of the cage. At the end of the day, $1000 may not be that much, but as the lines blur between sports and entertainment, fighters need to be conscious that these commissions may start cracking down. The entire line-up of UFC Fresno is listed down below, capped off by a wild contender bout between Cub Swanson and Brian Ortega.