Home » MMA News » Stephen Thompson » EXCLUSIVE | Should side kicks to the knee be illeg... 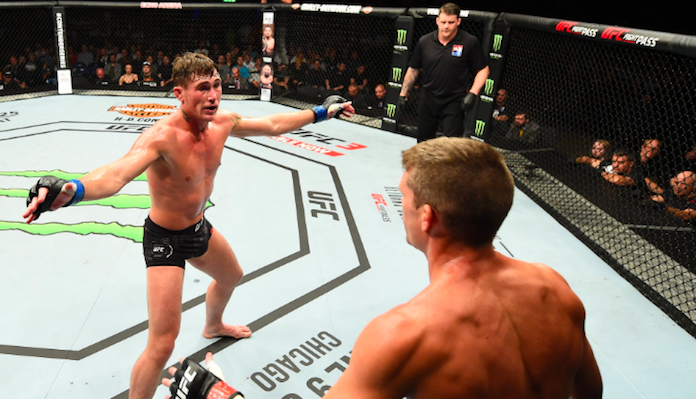 Having finally watched his most recent octagon appearance, Stephen Thompson sat down with BJPENN.com’s Chris Taylor to discuss his takeaways from the UFC Liverpool headliner and what went wrong during his five-round battle with Darren Till.

“I did finally watch the fight man. Me and my coaches came back and watched the fight. You know, there was one thing that really slowed me down during the fight and that was the side kick to the knee. It caught me just right in the center of the knee in the first or second round. I believe it was the second round if I remember correctly. But yeah man I heard some cracking and popping and it slowed me down tremendously so it was hard for me to move around the way I wanted to. I was also worried that if he hit it again the fight would be over. Not just that but also my career. It would have been devastating to tear my ACL for a second time. But yeah after watching the fight, you know, there’s always something you can go back and work on.”

Early on in his fight with Till, the Liverpool native was able to catch Thompson with a hard side kick to the knee. That strike caused Thompson to tear his MCL, a injury which will no prevent him from training for at least eight weeks.

“You know I tore my MCL in the fight with Till. We did an MRI and thankfully nothing else was damaged. No surgery is required for this injury but I have to give it at least eight weeks to heal properly before I can get back to training.”

Taylor expressed his personal dislike for the aforementioned side kick to the knee strike and stated his desire to see that technique made illegal under the unified rules of MMA. Thompson was definitely on board with that idea.

“Yeah I feel you there man,” said Thompson. “I honestly think that strike should be made illegal. It could end somebodies career. You know Robert Whittaker had to have ACL surgery following his first fight with Yoel Romero due to that particular strike. And as you could see, Robert Whittaker made sure to beat Yoel Romero to the punch in their second fight. He threw a lot more than he did this time around. It is just a very dangerous technique. I think a lot of fighters throw that strike but sometimes it is for different reasons. When I fought Jorge Masvidal he used that same side kick to the knee. But when Jorge threw it, he was doing so just to keep me away. Not in an attempt to injure my knee. But when I was in the cage fighting Till it felt like ok this guy is trying to break my leg. It was like he had intentions of ripping everything out in my knee. That’s how I felt anyway. Like this dude is really trying to injure me in here. I think it an ugly strike and that it should be made illegal.”

Do you agree with Chris Taylor and Stephen Thompson? Should side kicks to the knee be made illegal in mixed martial arts? Sound off PENN Nation!