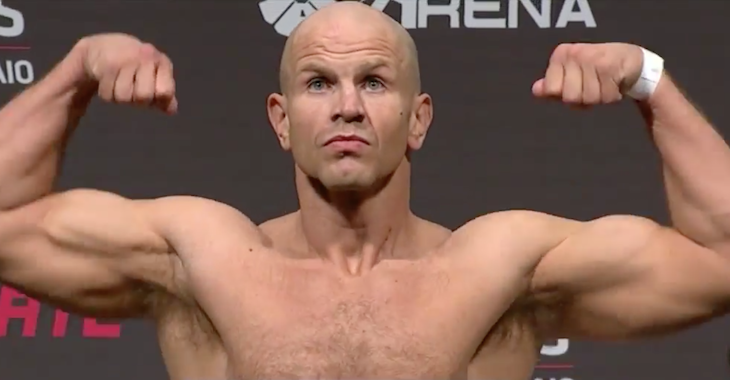 Another shocking death has hit the MMA community.

UFC veteran Ryan Jimmo was involved in a hit-and-run incident in Edmonton, Canada early Sunday morning and died later that day due to injuries sustained from the incident.

Back in May, Bellator MMA fighter Jordan Parsons was also killed in a hit-and-run incident.

The MMA community reacted in various ways to the untimely death of the 34-year-old that had seven fights with the UFC.

Jimmo was a cool dude, always a pleasure talking to him & had one of the best victory dances. RIP @ryanjimmo pic.twitter.com/vtQtas10IG

Good God, another senseless death? Another f'n hit n run? I'm so sick of all this nonsense. You were a unique soul, my guy. #RIPJimmo

Wow! Sad to hear about the recent tragic passing of UFC Vet Ryan Jimmo. Terrible! My prayers out to his family during this time.

If this is what happened, senseless and I hope they catch whoever is responsible. #ryanjimmo https://t.co/pJKcL0wBWQ

Jimmo was a great guy I had the opportunity to train with him a few times. Nothing but good things to say about him. May he rest in peace.

Rest in peace my friend and former roommate and teammate Ryan Jimmo. pic.twitter.com/cLOAXLHBk2

Hope they find the cowards responsible, too much senseless death this year. #RIPRyanJimmo

So very sad to hear about the unnecessary death of Ryan Jimmo. He was a great person and will be missed. RIP Ryan

So very sad to hear about the tragic loss of Ryan Jimmo. This has been a terrible year in MMA for loss of life. Prayers out to his family

Wow this is unreal! Was such a laugh to be around him in the practice room! Another good one lost to madness! https://t.co/jOrvBhlQEY

The world lost an incredible man this weekend. With a very heavy heart I regret to inform all of you that Ryan "The Big Deal" Jimmo passed away. He was a very dear friend to me. We worked together on many projects and shared many laughs. I will greatly miss this man and all of his quirkiness. He was a brave warrior, articulate gentleman and passionate humanitarian. #ripbigdeal #ripjimmo

The MMA community lost an outstanding gentlemen today @ryanjimmo has been a teammate& friend of mine the past few years. It is very sad news to hear of his passing. He will be missed greatly by his team down here in Arizona.

I'm still in disbelief about the loss of @ryanjimmo. I loved having him at our gym and on our team. He was loved by the all the guys and by the members @powermmafitness. He had such a positive energy and always had a smile on his face. We loved him. I'll miss you Jimmo.