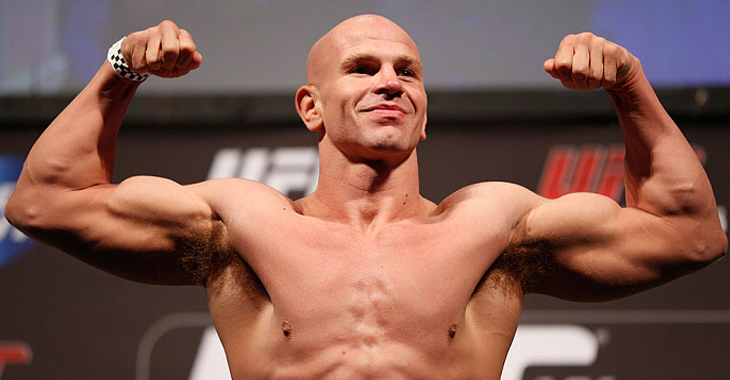 Tragedy struck the MMA community earlier this week when it was announced that UFC light heavyweight veteran Ryan Jimmo had been killed in a hit-and-run accident in Edmonton, Alberta, Canada.

The two suspects involved in the hit-and-run incident that left Ryan Jimmo dead have since been arrested and taken in to custody. The two young men (21 + 23 years of age) had purposely ran over Ryan with their pickup truck making the incident that much more horrifying.

Canadian news outlet CBC recently spoke with Jimmo’s fiancé who was with Ryan the night of his tragic death:

“I was telling him I love him and to fight,” Roxie Reece told CBC. “And he fought really hard, Ryan did, for his life.”

Reece explained how Ryan had proposed to her just hours prior to the hit-and-run incident which took his life:

“He was awesome ’cause he was willing to meet me in the middle with that,” said Reece.

“He said: ‘Honey I believe in Jesus’ and he pointed to his heart. To me, that was the biggest gift. That meant more than anything.”

That night, they went out to see their first movie together in a theatre. The film was Independence Day: Resurgence. In the middle of the movie, Jimmo turned to Reece with a proposal.

“He said: ‘Honey, you’re absolutely the most beautiful woman I’ve ever laid eyes on in this entire world. I just love you so much. I just want to marry you and have children with you.’ To which, I was like, ‘OK honey, let’s do it, that would be awesome.'”

Reece detailed to CBC what exactly happened after they left the theatre:

After the movie, the two returned to Jimmo’s friend’s house. There was a big lightning storm that night and the two lovebirds were excited by their engagement. “After the movie, Ryan and I were on cloud 1,000,” said Reece.

They decided to go for a late drive, to see the lightning and a little bit more of Edmonton.

“Ryan and I weren’t out at the bar, we weren’t drinking, we weren’t partying,” said Reece. “His goal that night was to take his girlfriend and show her the city and go home.”

According to Reece, that’s when Jimmo noticed a big truck tailgating them. So he turned off that street and told Reece he was going to let the guys in the truck go by.

“So we took a left to let them go by,” said Reece. “They followed Ryan even more close. And so now he and I were both like ‘OK what’s going on?’ And then he took the first right into that parking lot … I had no clue where we were at.”

She said the truck followed them into the parking lot.

“So these guys pulled up real close right behind Ryan, almost as if they were going to hit us, and we both felt nervous. And Ryan felt the need to do something because we didn’t want them following us out of there,” said Reece.

“It was kind of scary. There was something not right there and I didn’t know what was going on. So Ryan, you know, got out to talk to them and they were not nice guys and Ryan came to get back in the car. And they said something else and he went back to talk with them.”

That’s when he was hit and the truck took off.

As Jimmo lay on the pavement, Reece got out of their vehicle and ran over to him, screaming and telling people to phone 911. She didn’t have her phone and Jimmo’s was locked.

“In those moments, I felt the most scared I’ve ever felt,” said Reece. “I felt helpless. And I lay beside Ryan and I talked with him and told him, ‘Come on honey, you can do it, you can fight, I’m right here, I’m right here.’ And it’s important to me that people know that Ryan was not alone.”

Ryan Jimmo was a class act and one of the good guys in mixed martial arts. He will be greatly missed.