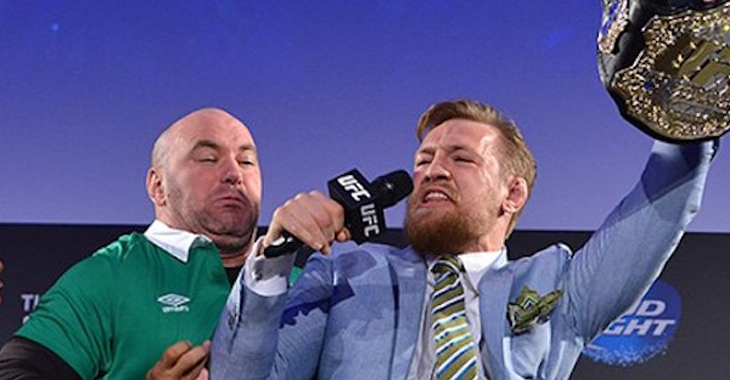 Conor McGregor bit off even more than he could chew in his attempt to negotiate media appearances for his once scheduled main event at UFC 200. “The Notorious” and Nate Diaz were pulled from the main event of UFC 200 after McGregor refused to take part in media obligations to promote the historic card.

Now that the two are again signed to fight at UFC 202, McGregor says that he is still fighting with the UFC over the amount of media ahead of the fight.

“We’re still back and forth with media obligations,” McGregor said (transcribed by MMA Fighting) at an event to promote his coach John Kavanagh’s new book “Win or Learn.” “It’s going on right to this second. It’s never-ending. They want to pull you left and right.”

“The Notorious” said that there is much more going on than what meets the eyes and ears in terms of media appearances and obligations.

“I think some people don’t understand how taxing that is, especially coming after a loss like that where I really truly need to look out for me and get myself right and come out the way I need to feel,” McGregor said. “I can’t fatigue like that and live with myself after that. Seeing the way the last fight happened, I can’t live with it. I need to isolate myself and just get my work in and come back and get my revenge. And that’s what I’m doing.”

McGregor said his famous retirement tweet unexpectedly got a lot more attention than he anticipated.

“When you see it going all over the place, I’m like, ‘Oh sh*t,'” McGregor said. “Now it’s hit the fan. It was a semi-joke in it. It was kind of a negotiating tactic, going back and forth with the UFC. And then it’s on CNN.”