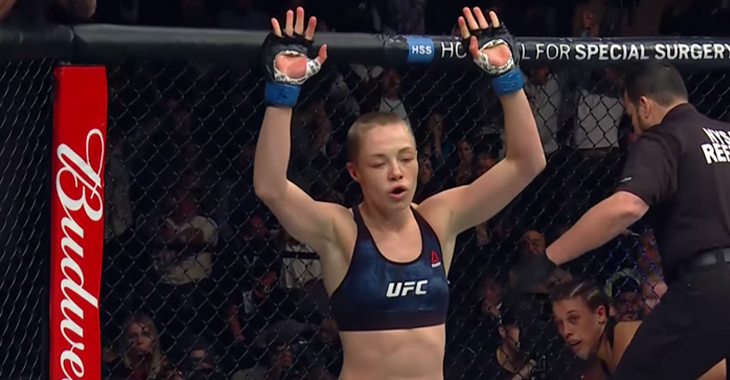 There has been a lot on mixed opinions and controversy since Valentina Shevchenko’s domination against Priscila Cachoeira at UFC Belem. So much so, that Shevchenko’s amazing performance has taken a back seat to referee and corner criticism. Rose Namajunas has put in many hours with ‘The Bullet’ so she was watching the fight closely. She recently opened up about her thoughts on if they fight should have been stopped or not. If it was her? She definitely would have wanted the towel threw in.

“That [late stoppage is] a touchy subject. I think clearly you saw that [Priscila Cachoeira] wasn’t going to improve her position [against Valentina Shevchenko]. So, you could definitely make the argument for that was a little too long.  […] I told my corner [Trevor Whitman] that if I’m lookin’ like that in a fight, the just throw in the towel for me, but that’s my personal choice. Those strikes on the canvas – in certain positions they weren’t that bad – but when you’re in full mount and somebody is raining down punches on you, your head is hitting the canvas too so it’s like double impact.”

Shevchenko lands 217 punches to Cachoeira’s 1.
80% of those were head shots.
Cachoeira spent ZERO time in control.

Let those numbers soak in for a second. pic.twitter.com/guZhe3JP7a

“That’s a little scary and nowadays you see in MMA, ground and pound is so much more vicious and so much more influential in the fight, so I think it’s really important. I think people really don’t understand how vicious ground and pound can be. Also, not everybody knows how to throw proper strikes on the ground too. It’s hard to say, every situation is different and when you’re in the fight, that might really piss you off. For me, I want to be totally dominant and not be in that position, but at the same time, I might be in a spot where [I say], ‘Let me fight this one out.'” — Rose Namajunas speaking to Ariel Helwani of MMA Fighting.

It’s more of a complicated argument than it would seem. Fighters, while they may be cautious about longevity, also want to go out on their shields. On the other hand, how much is too much punishment? As a fighter absorbs more punishment in a fight, judgement can be impaired. It’s up to their coaches and the referee to make sure the fighter’s safety is taken into account. Although, there is no question about Rose Namajunas’ toughness and she’d rather have her coach throw in the towel.