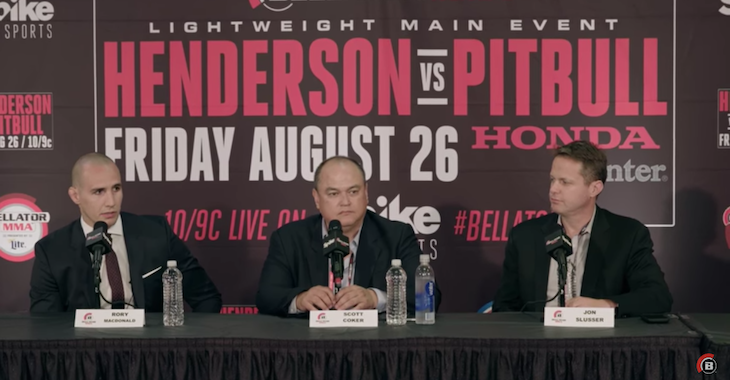 Last month, former UFC welterweight title challenger Rory MacDonald (18-4) made some serious waves by leaving the UFC and joining the Bellator MMA roster. And while the Canadian doesn’t plan to step into the Bellator cage until sometime in 2017, he’s making his plans for his time in the organization very clear. He wants big fights for big money – even if it means he has to step far outside his welterweight home to get them.

In a recent appearance on Booker T’s Heated Conversations podcast, MacDonald discussed his desire for exciting fights in the Bellator cage – something he says he could no longer find in the UFC.

“It had got to the point [in the UFC] where we all dressed the same, looked the same, had the same clothes and the same characters over and over again,” MacDonald said. “That’s just dry and not entertaining for me.” In Bellator, however, MacDonald believes there will be room for many more exciting opportunities.

In terms of naming opponents that interested him, MacDonald was noncommittal, and simply assured that he’d go where the money is – though he did previously suggested he’s interested in a “gangster weight” bout with new Bellator signee Chael Sonnen.

“There’s a ton of fights I want, but I’ve told the promoters straight out that I have a contract that says I can fight any weight class they want,” he said. “I said, anybody from welterweight  to heavyweight I’ll fight them. If it makes dollars then I’m into it.”

“There no one person in particular I have my eye on, but I want to rack up some championship belts,” MacDonald continued. “I’m looking for super fights in any division.”

Yes, the former UFC fighter has big plans for his time as a Bellator fighter. How do you think the long-time welterweight would fare in the organization’s middleweight, light heavyweight and heavyweight divisions? Would you give him a chance against monsters like Chael Sonnen, Phil Davis, and Cheick Kongo? Sound off in the comments, PENN nation!