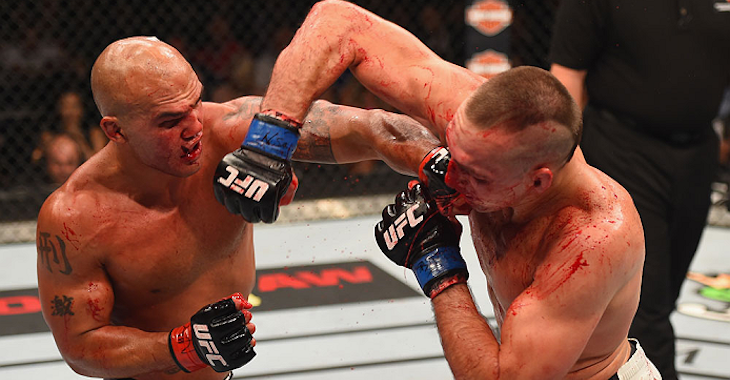 On Monday afternoon, Ariel Helwani returned to our screens with the latest episode of The MMA Hour. One of this episode’s many big-name guests was Rory MacDonald, who shook up the fight world by announcing that he recently heard that Robbie Lawler failed a drug test in the wake of their July 2015 rematch.

Here’s what MacDonald had to say on the show:

“Actually right before this conversation, something very interesting came up,” he told Helwani. “We’re going to have to see where it goes, but it has something to do with my title fight with Robbie. There’s some very interesting information that came about.”

“I don’t want to speak out too loud about but it’s something that really grabs my attention and I think a lot of people are going to be very interested to hear about this if it actually is true,” MacDonald continued. “I have to do my research, but it could be a very big thing and it pisses me right off to hear about it, to be honest. I feel robbed.”

Clearly not blind to what MacDonald was insinuating, Helwani then asked the former welterweight contender to clarify what he was suggesting.

“Some [of Robbie’s] test results came out four times higher than the limit for my fight with him,” MacDonald said, pulling no punches, and reassuring Helwani that this information came from a reliable source. “Like I said, it could be bullshit, but we have to look into it. I don’t want to start pointing fingers or anything, but look at that team’s history. It makes me very suspicious.”

These are undeniably weighty accusations from MacDonald, who recently left the UFC and joined the Bellator roster. If these accusations turn out to be true, then the recent history of the welterweight division, which was ruled by Lawler until he was knocked out by Tyron Woodley in July, has a dark shadow cast over it. If these claims aren’t true, however, MacDonald is going to have some serious apologizing to do.

Stay tuned for more details as they emerge, and weigh in on this new drama in the comments below.