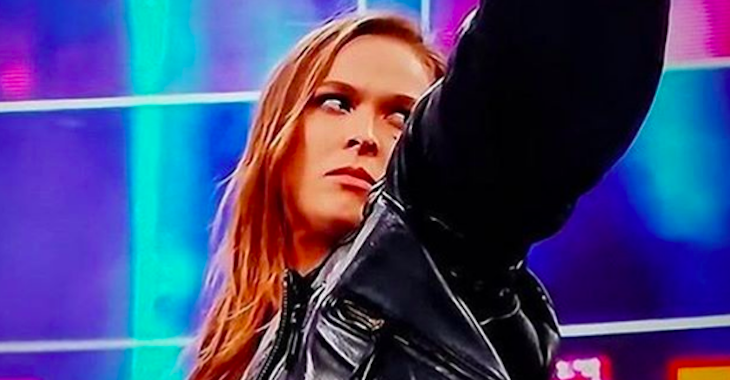 Last night, during the action packed Royal Rumble broadcast, we learned that former UFC women’s bantamweight queen Ronda Rousey had signed with WWE, where she’ll debut at WrestleMania in April.

While this news created a tidal wave of excitement among Rousey fans, it also seemed to serve as the eulogy for her MMA career.

Apparently, however, Rousey is still not willing to pull the plug on her life as a fighter. Speaking to ESPN in an interview that was released briefly after her appearance at Royal Rumble, Rousey refused admit she was retired from MMA, effectively jamming her foot in the door before it closed completely.

“That’s what everybody else seems to say. I never retired from judo,” Rousey said of her retirement from MMA. “If that’s what you guys want to think. All I know is that I really want to devote 100 percent of my time to wrestling right now, and whatever people want to call that, they can call it.”

“I wouldn’t doubt myself doing anything,” she concluded when asked if she’d ever return to the UFC.

Whatever the future holds, Rousey assures her sole focus at present is pro wrestling.

“This is my life now. First priority on my timeline for the next several years. This is not a smash-and-grab; this is not a publicity stunt,” Rousey said. “When I first met with Triple H, I told him, ‘There are other things I can do with my time that’ll make way more money, but I won’t enjoy nearly as much.'”

Do you think we’ll ever see Ronda Rousey back in the UFC’s Octagon, or will the remainder of her career unfold in the pro wrestling arena? Join the conversation in the comments section!