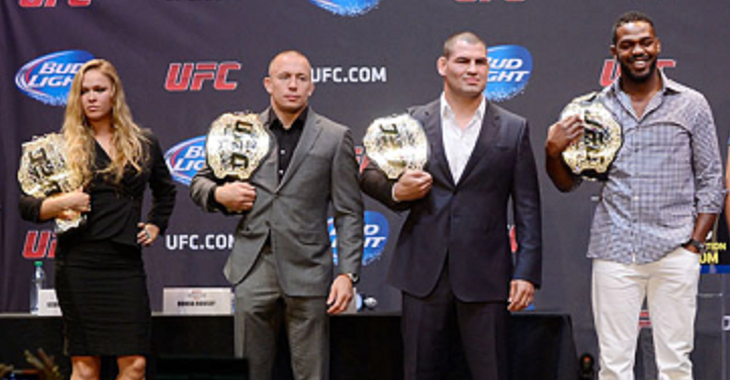 Just a single star from the UFC shines amongst the rest of Time Magazine’s prestigious list of “100 Most Influential People.”

Former UFC women’s bantamweight champion Ronda Rousey is the lone MMA fighter to make it on the list in the Icon category where she is shoulder to shoulder with other names such as Leonardo DiCaprio, Adele, Nicki Minaj and Usain Bolt.

Other categories in “The 100 Most Influential People” include Pioneers, Titans, Artists, and Leaders.

Time Magazine stated, “The people on the list, each in their own way, have lessons to teach. We can debate those lessons; we don’t have to endorse them or agree with them.”

Actor, writer and producer Tina Fey who co-stars with Rousey in their upcoming film Do Nothing Bitches wrote up Rousey’s spot for Time Magazine. Fey stated in part of her piece about Rousey, “Imagine if we could teach our daughters to value their bodies for what they can do, not for how others think they look. Could Ronda be the one to finally help us understand that as females, we define the word feminine and that it doesn’t define us?”

Ronda Rousey is expected to fight again in the UFC later this year after taking time off from fighting to pursue filming movie projects.