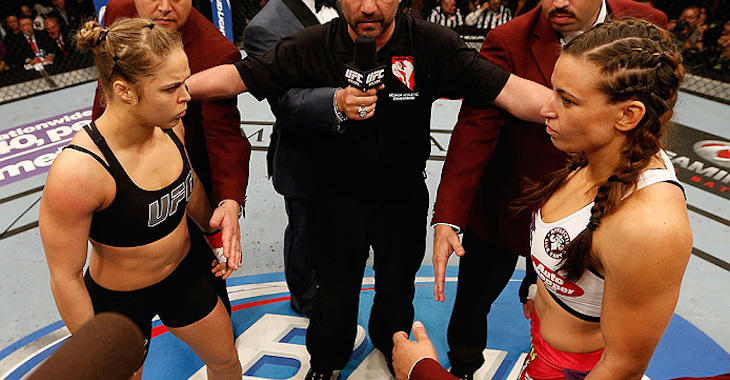 Last month, it was announced that former women’s bantamweight champ and transcendent star Ronda Rousey would be returning to action for the first time since she was levelled by a Holly Holm head kick almost a year ago. The former champ will be making this return against current champion Amanda Nunes in the main event of UFC 207 this December 30.

Shortly after this news broke, Rousey made an appearance on The Ellen DeGeneres Show and made the somewhat surprising announcement that, no matter the outcome of her looming bout with Nunes, it will likely be one of her last.

While this claim surprised many MMA fans, it didn’t come as a shock to long-time Rousey rival and former champion Miesha Tate. Tate weighed in on the situation in an interview with TMZ Sports (transcribed by MMAMania.com).

“I already knew that,” Tate said when asked about Rousey’s retirement talk. “Didn’t everyone already know that? I don’t know why everyone is so surprised by it, honestly. She was already talking about that before she fought Holly [Holm]. So it’s no surprise to me. I already kind of knew this would probably be one of her last ones, if not potentially her last one, if she doesn’t win it. I think it could be her last one.” Though Tate is not especially surprised by Rousey’s retirement plans, she did say that she’d like one more go around with the MMA star before she hangs up the gloves for good. If Tate gets this desired rematch, however, she hopes it’d be with the best possible version of Rousey – not an under-motivated one.

“I really would like another crack at her,” Tate  explained when asked if she’d be disappointed by Rousey’s retirement. “I don’t want a half-hearted version of Ronda anyway so I hope she comes back strong and I hope it’s not too much of a race against the clock. Definitely I would like to face her in the future.”

When we last saw Tate in action, she tapped out to a first-round submission applied by Amanda Nunes, surrendering the women’s bantamweight crown in the process. She’ll attempt to rebound from this loss when she takes on Raquel Pennington at UFC 205 this November 12. The two women will kick off the event’s stacked main card.

Would you like to see Tate and Rousey go at it a third time? Sound off, PENN Nation!