Ahead of the fight, the MMA community is rather torn on their predictions for the highly anticipated scrap. While some believe that after over a year away from the Octagon, Ronda Rousey will return and make a statement by defeating Nunes and capturing the women’s bantamweight champion, others believe that the fight will play out much similar to the Rousey vs. Holm fight, which saw Rousey lose the women’s bantamweight championship at UFC 193, and Nunes will knock Rousey out.

Ahead of the fight, former UFC women’s bantamweight champion Miesha Tate, who has shared the Octagon with both women, spoke with ESPN to weigh-in on the fight:

“I think if Ronda is at her height, I would probably say Ronda [wins]. I always tend to favor grapplers. That’s just my bias. I think it’s more probable for a fight to go to the ground and get finished than it is for a clean knockout. That’s less common in women’s MMA. So, if you factor that in, I think Ronda is the stronger grappler.”

“What’s so weird about this fight is all the X factors. Amanda is a really tenacious fighter and I think she’s going to have a newfound confidence coming into this fight.

“I guess what I don’t know is how Ronda is going to show up. I’m pretty confident about what Amanda will show up, but Ronda – it has been such a long time. Ring rust can be a very real thing and how is she going to be as far as being punch-shy? She knows Amanda is heavy-handed, and after being cracked by Holly, does that change the mindset of someone like Ronda who kind of believed, along with many others, she was untouchable?

“It’s hard to say who wins this because it kind of depends on what version of Ronda shows up.” 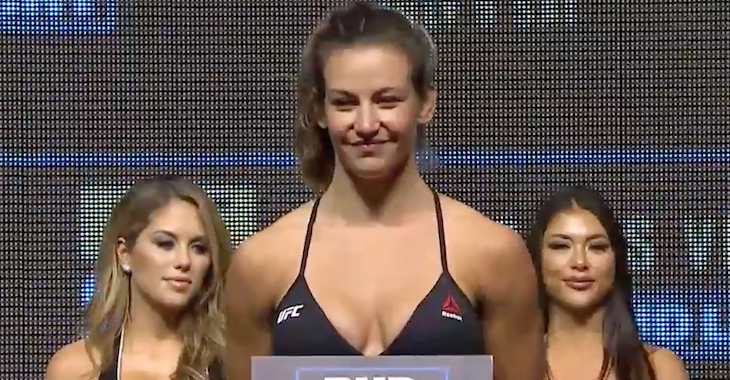 Tate is currently coming off a UFC 200 loss to Nunes, which saw her lose the women’s bantamweight championship. She will have the opportunity to return to the win column when she faces Raquel Pennington at UFC 205 on November 12th.
Do you agree with Tate’s prediction for the fight PENN Nation? Give us your prediction for Nunes vs. Rousey below!