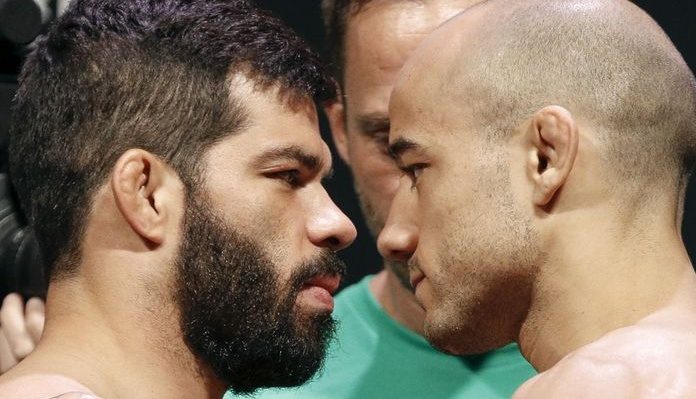 With the UFC’s bantamweight champion TJ Dillashaw chasing other division’s titles, his own division has to move on and it now begins to start doing so.

After winning the title for the second time by defeating arch-rival, Cody Garbrandt, Dillashaw would defend it successfully against his foe in their immediate rematch at UFC 227.

That same night, Henry Cejudo shocked the world and made history by being the first man to defeat and dethrone the reigning flyweight king, Demetrious “Mighty Mouse” Johnson. This led to Cejudo instantly calling out whoever the winner was of the bantamweight title bout that followed his.

With that champion vs champion battle now set to take place for Cejudo’s 125-pound crown, the top bantamweight contenders need to stay active. And that they are.

ESPN’s Brett Okamoto confirmed today that a rematch between Raphael Assuncao (27-5) and Marlon Moraes (21-5-1) is close to finalization for the main event of the second UFC event on ESPN+, UFC Fortaleza on February 2.

Since each of their last outings, Assuncao and Moraes have been making their cases for them to be the ones to receive the next title shot. And they both have quite strong cases.

Assuncao is 1-1 with Dillashaw and has only lost to (and beat him) in his 12 fights at bantamweight. Meaning that one of his wins coming over Moraes.

For Moraes, the former WSOF ruler has found his stride since the very close loss to Assuncao in his promotional debut. He’s won three in a row since with his most recent two coming by way of some fantastic knockouts over Aljamain Sterling and Jimmie Rivera.

With Dominick Cruz targetted to return against John Lineker at UFC 233 when Dillashaw faces Cejudo, it will be interesting to see how things play out at 135-pounds at the start of 2019.