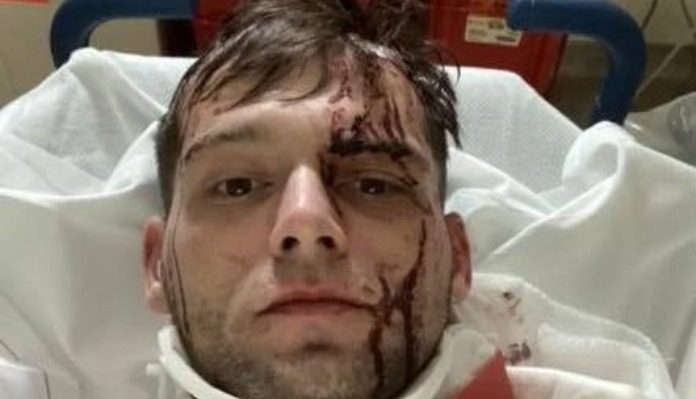 Hunter Boone, an amateur MMA fighter competing on a card in Oklahoma sustained a serious injury on Saturday.

Boone competed on Martial Combat League 3 in Shawnee, Oklahoma against Jordan Brown. The fight lasted only 17 seconds as when Brown took Boone down with an early takedown, Hunter’s head hit an exposed cage bracket resulting in a massive tear on the top of his head that would require 17 staples to close the wound.

MyMMANews.com was the first to report the incident and retrieved social media posts from Hunter Boone’s coach, Jason Greer who described what happened.

“A few seconds after the bell rung Hunter and his opponent spun into the cage,” Greer said in a post on Facebook as he tried to describe what went down. “His opponent had a collar tie and as they hit the fence Hunter’s head slammed into the gate resulting in Hunter suffering a 20 centimeter gash across the front of his hairline from the left to the right, down the right side and towards the back basically scalping him. It knocked him unconscious immediately but he had regained consciousness before he hit the ground. Knowing he had just received a fight ending blow he started scrambling from the cocoon with the idea of a triangle. Fighting for the win against all odds! I had no idea in the moment what had even happened after the ref stopped the fight and immediately called for the Doctor.”

Hunter Boone took to social media to post graphic photos of the injury. Warning, the photos are hard to stomach.

The promotion, Martial Combat League then took to their Facebook page where they declined fault and said they are unsure how the incident happened.

“We’d like to address the incident that occurred during a fight at last nights event. We understand and appreciate everyone’s concern on what happened and our hearts are with the individual who was injured in this incident. We were in just as much shock as anyone when this occurred. We assembled our cage no differently than we have for each of our previous events,” they wrote about Hunter Boone. “It is our understanding that the sanctioning commission of the event inspected the cage prior to the show. No issues with the cage where brought to our attention by the sanctioning commission. There was a very unfortunate event that occurred during a takedown near the door of our cage. How the injury occurred is still undetermined and there was no clear sign as to what or why this injury took place.

“After the cage was cleared of the incident, our cage was fully inspected by multiple individuals of the sanctioning commission and our cage was deemed necessary to continue. We don’t have an answer as to why this injury occurred and we’re, without a doubt, extremely sorry to the individual who suffered this injury,” the statement added about Boone. “We’re not sure how or why concerns were brought up about us not taking care of the injured athlete, this certainly is not the case. We take required action and secure proper coverage to make certain qualified injuries occurred are covered prior to every event we promote. And to address the concerns of the injured individual’s opponent being declared the winner, that issue has nothing to do with our promotion.

“We have no control, nor does the person declared the winner, over who the sanctioning body determines the winner of any fights that take place on any of our events, including last night. Anyone who has ever been apart of our shows, as a fan or an athlete, knows the the effort we put into producing top tier shows for combat athletes to showcase their skill. We would NEVER knowingly put on a show if there was ever any doubt whether or not the athletes competing under our banner were fully protected. And again, our hearts, thoughts, and prayers are with the individual involved in this incident,” the statement concluded about Boone.”

The hope for many is Hunter Boone gets healthy and has a speedy recovery.

What do you make of this incident?