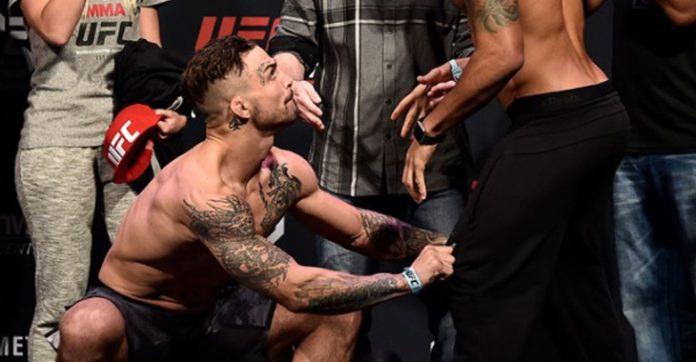 Wooing in the face of his opponent after stepping on the scale, primal screams, hitting himself in the face, accosting fighters Octagon-side post-fight, Mike Perry knows how to make a scene. Yesterday wasn’t any different at the UFC Orlando ceremonial weigh-ins. Perry is going into his fight today against Max Griffin with time invested in the mental game, well, if you could call it that. He attempted to pants Griffin after the flexing and the photographs yesterday.

Some mf’s don’t deserve the entertainment I bring with their bullshit comments. I’m gonna fuck him up so bad you mf’s gonna beg me to come back #🖕🏼

“I perform when the lights are on. Look, all UFC fighters are supposed to be tough. Some people are saying I’m getting the easy fight. A lot of people are saying it’s going to be a tough fight, or that they just can’t wait to see. I can understand why they can’t wait to see. I’m expecting like a KO of the year out of this. I like Max Griffin as a person. I met him, I hung out with him. But mentally, he even said back then, he was like, ‘We’re going to fight.’” — Mike Perry speaking to BJ Penn.

Mike Perry was on a war path until he met some roadblocks in Alan Jouban and most recently Santiago Ponzinibbio, losing by decision from both. However, Perry is looking to rebound in a serious manner and get back to his knocking out ways. If pantsing is what he does pre-fight, imagine what he’ll do if he wins at UFC Orlando? It all goes down tonight.