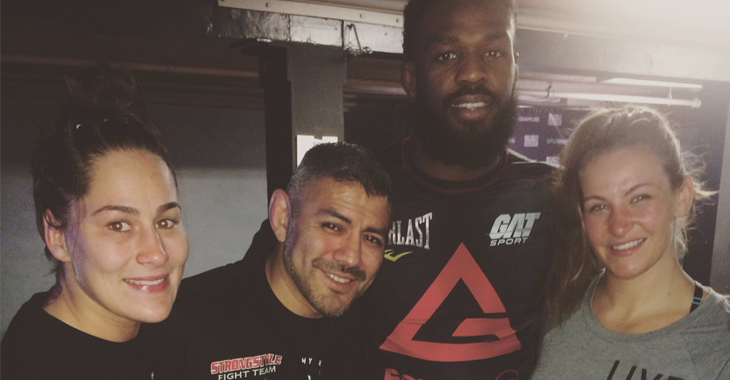 At the beginning of this week, Jon Jones finally appeared before the California State Athletic Commission. He subsequently had his license revoked, fined $205K, and will wait to see what length of suspension USADA will hand out. In the midst of the ongoing Jon Jones saga, somehow a feud between him and Miesha Tate developed. She spoke about the CSAC hearing on her regular radio show and said she stopped becoming a fan after being constantly let down. Jones responded publicly and it’s just been on-going since then.

@MieshaTate I don’t quit when things get tough for me, I get stronger. You just wait and see, maybe you’ll even find motivation in it. Sucks I lost you as a fan. Enjoy retirement sister

“Jon Jones, you make things tougher for yourself. I hope you can figure it out this time but I’m not holding my breath. I supported you plenty in the past and if your implying I’m a quitter, that’s pretty low. There’s a time when all of us have to stop and I’m happy I walked away with a clean slate. I’m really not trying to be negative Jon, just honest. I think you’re a great fighter and as a person I wish you nothing but the best. Still feel let down one too many times. Hope you turn it around for yourself, brother.” — Miesha Tate on Twitter.

@MieshaTate Never meet negativity with negativity, I shouldn’t have responded to you in the first place. You won

After responding to his ‘haters’ even before the CSAC hearing and now this back-and-forth with Miesha Tate, it’s clear that Jon Jones won’t stop speaking his mind no matter what. However, his actions will continue to draw criticism along with the praise from fans and other fighters alike. In our new era of the UFC and social media, it’s not clear whether saying whatever he wants on Twitter is helping or hurting his brand during this crucial time in his career, but a feud with Miesha Tate may be the last thing he needs.