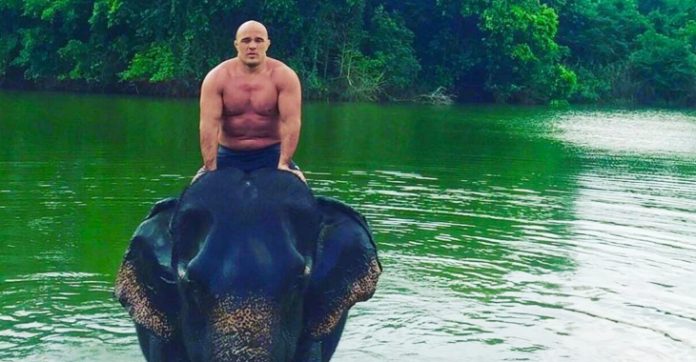 Even beasts have dreams. For ‘The Brick Layer’ Ilir Latifi, his aspirations go beyond just smashing his opponents. He’s just coming off a spectacular finish over Ovince Saint Preux, strategically calling out UFC light heavyweight champion Daniel Cormier afterwards. Finally climbing to the top five of the ranks, Latifi is closer to that gold belt than ever before. After he gets the strap though, he wants to put on a safari hat and become the new Steve Irwin.

“I love being out n nature. I’m very interested in everything with nature and animals and stuff and wildlife. I just love taking a ride on a horse on the beach, you know? I never thought there was going to be such a hype about that photo. I don’t know, I think it’s just like such a natural photo. Just a little bit raw, like some kind of ancient time. I don’t know what, but it’s a cool photo, I can admit it. [The elephant photo] was in Thailand at an elephant sanctuary that helps elephants that’s been abused and they take care of them. I got the opportunity to meet some amazing animals. Elephants are very intelligent.”

For some reason I get requests to post this picture all the time so here you go 😂 pic.twitter.com/xcVSrR43Ts

“[Animals] are a passion I’ve had since a kid. I always said one day I’m going to a Steve Irwin kind of animal show. 100-percent, you’re gonna see that and it’s going to be on another level because you’re never gonna see the things I’m gonna do. Worldwide, that’s my plan. I have plans about that. I just want to find the right people and team to work with, a great production team to do it. I’d love to do it and I think a lot of people would love to see it, huh? Yeah, I’m gonna do some crazy show. We’d probably start in Africa and do the big five: See all the lions, the buffalo and rhinos — Rhinos are my favorite.” — Ilir Latifi speaking to Nick Baldwin on The MMA Circus.

UFC Fight Pass better get on this at the ground level before Ilir Latifi’s idea gets picked up by National Geographic or the Discovery channel. Rarely does an idea like this come about with a man like Latifi at the helm. Taking care of elephants, wrestling alligators, and professing his love of the mighty rhinoceros? Not just UFC fans would watch a show like that, but broad sweeping demographics all across our great green and blue world. Someone call this man, make this happen, and put us down for a DVD preorder.