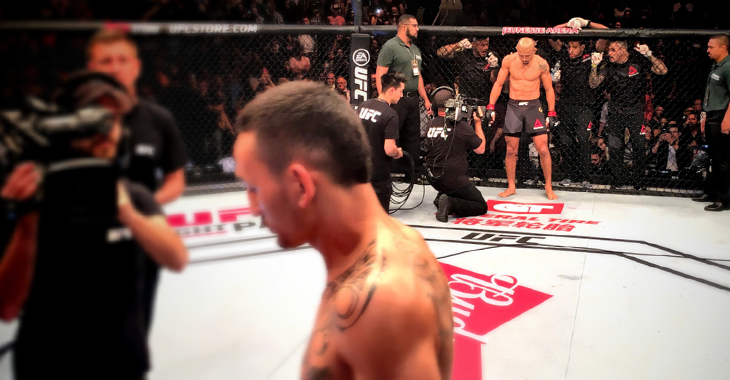 Back in June, Hawaii’s Max Holloway captured the UFC featherweight title by stopping MMA legend Jose Aldo with a salvo of third-round punches. Last night, in the main event of UFC 218, the pair ran it back. Just like their first fight, this one was very fun while it lasted, but ultimately went to Holloway, who won with third-round strikes.

Now 2-0 against Aldo, Holloway clearly has ample respect for his foe. Post-fight, the champ took to social media to issue some thank-yous. One of the recipients of his thanks was Aldo.

See what Holloway had to say about Aldo below:

First and foremost I gotta thank my lord and savior Jesus Christ.

Second the great city of Detroit my family my friends and all of fans around the world!

Thank you @josealdojunior it was an honor to be able to compete against you again.

“Thank you [Jose Aldo] it was an honor to be able to compete against you again,” Holloway said in his Tweet directed at Aldo.

With his second defeat of Aldo, Holloway extended his win-streak to an absolutely ludicrous 12 straight. Highlights of this streak, which is one of the longest in UFC history, include wins over top-flight foes in Andre Fili, Akira Corassani, Cole Miller, Cub Swanson, Charles Oliveira, Jeremy Stephens, Ricardo Lamas, Anthony Pettis, and now Aldo twice. His last loss occurred in 2013, when he lost a decision to reigning UFC lightweight champion Conor McGregor – who is clearly paying attention to his career.

Aldo, meanwhile, is now on the first two-fight skid of his amazing career. The featherweight legend is now 26-4 in sum, with his only Octagon losses coming to Conor McGregor and Holloway.

What do you think of this classy remark from Max Holloway?