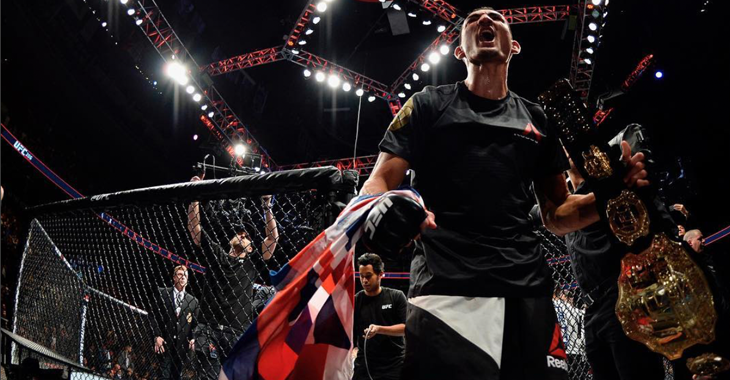 Back at UFC Fresno and UFC Winnipeg, there were some pivotal moments in the UFC’s featherweight division. Undefeated Brian Ortega came in cool, calm, and collected and it paid off. He finished Cub Swanson in the second round with a guillotine choke, making it so the UFC could no longer deny him a shot at gold. Meanwhile, Josh Emmett showed up short notice against the very game Ricardo Lamas, knocking him out in the first round and shocking the crowd. As the new king, don’t think Max Holloway wasn’t watching this unfold. He recently voiced his respect of their performances but was also quick to send out a warning.

“I was impressed by the two wins by [Brian Ortega and Josh Emmett] – of course. Ortega finishes Cub – that’s impressive stuff. It’s always impressive when you finish someone. Finishing anybody in the top 10, even the top five when we’re talking about those two guys, is amazing. We’re the best fighters in the world and you get to finish them, that’s always cool to see. Me and Ortega are two young kids, so it should be fun whenever that happens. Josh Emmett came in and was able to shake it up real quick. I’m excited for the future. A lot of people are saying that one of those guys are going to give me a run. I can’t wait. I’m glad and I’m looking forward to the challenges. All these guys are cupcakes and there’s some new flavors, and I want my taste of them.”

“It is our job to make weight and Ricardo [Lamas] is the man; he didn’t have to [take the fight], but he took it anyway. If [Emmett] made 145, or 146 and was two pounds off, he would gain pretty much the same thing anyway. It’s just he’s not dying in the moment. I don’t really take nothing away from him. He had to give up 30 percent (of his purse). It’s simple: Ricardo got caught, and it’s life. This is a game. I’m glad he missed weight. Anybody wants to fight me and miss weight, come do it, bro. I get your money and I get to whoop your ass. I don’t take nothing away from the guy. You have a job, you’re supposed to make weight, but that would get me more fired up. This guy wants to disrespect me and not make weight? I’ll make sure with the ass-whooping you get that you’ll be like, ‘Damn, I should have made weight.'” — Max Holloway speaking to MMA Junkie’s Mike Bohn.

Max Holloway is always pure class and nothing but respect, but don’t get it twisted, he knows that these guys are coming for him and he’s ready and willing to take them out. Speaking of respect though, Josh Emmett has offered an immediate rematch to Ricardo Lamas and Brian Ortega said he’s willing to wait until Frankie Edgar gets the title shot he missed out on. It seems there is a trend of polite badasses in the featherweight division.