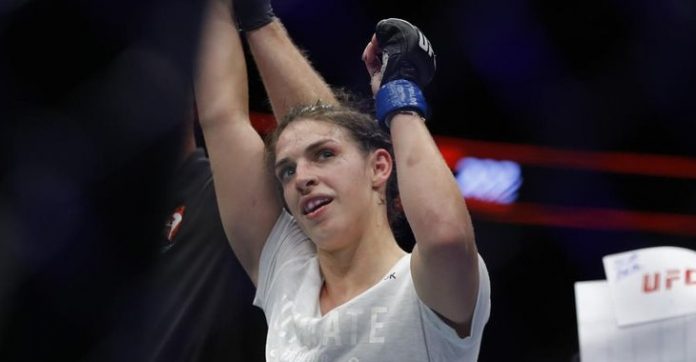 The twenty-four-year-old undefeated Brazilian Jiu-Jitsu phenom, Mackenzie Dern finally made her UFC debut earlier this month when she defeated Ashley Yoder at UFC 222 by split decision.

With a UFC return to Brazil on the horizon, Dern made it very clear that she wanted to get on the card if possible. And that appears to be the case. MMABrasil reports that Dern’s sophomore appearance in the UFC will come against The Ultimate Fighter season 23 finalist, Amanda Cooper on May 12th.

Unfortunately for Cooper, she came up short against Tatiana Suarez in the finals of TUF 23 but in her last time out we saw the 3-3, Cooper in her hometown of Detroit, Michigan at UFC 218 in December. She defeated and essentially eliminated Angela Magana from the UFC by second-round TKO.

Cooper has a boxing background but has the sneaky ability to submit her opponents as well. Something that Dern happens to be particularly good at…and Cooper has lost all of her fights by way of submission so it will be obvious what each fighter will want to do in this one.

UFC 224 continues to shape up with this fight announcement. Here’s the rest of the card so far:

Do you like this strawweight prospect matchup? Who wins it?