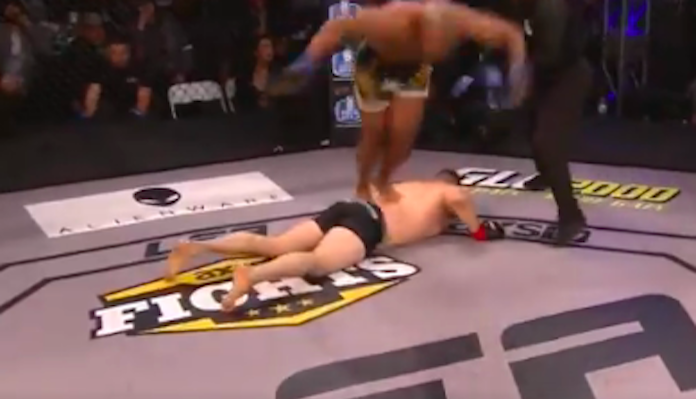 Drew Chatman’s pro debut, which occurred at LFA 36 over the weekend, could not have been weirder.

After his opponent Ivrins Ayala KO’d himself by colliding with Chatman’s knee on the mat, Chatman stood up, and executed a front-flip off of his unconcious opponent’s spine. For this display of truly unsportsmanlike conduct, Chatman was handed a DQ loss (which deprived him of his pay per California Athletic Commission rules), and received a 90-day suspension.

Speaking to MMAFighting this week, Chatman explained why he did what he did.

“Normally, I celebrate my fights,” he said. “If you see all my amateur fights, I’m doing flips, I’m doing cartwheels or whatever the case may be. I didn’t think before I did it. I just jumped and did a flip. So it was almost like subconsciously I did what I normally what I would do celebrating a victory that I normally get.”

“I want to apologize to Irvins Ayala,” Chatman said. “He was a good opponent. And he brought the fight to me. And he had a lot of heart. It was not a good move on my part as a martial artist. And I want to apologize to the California athletic commission, because they laid down the rules, they gave a great understanding and they do their job very well. Also, to Legacy, LFA, because they gave me a great opportunity to display my skills and it was a good platform.

“I’m not gonna play the victim here, because when you look at it the real victim here is Irvins Ayala. Let’s just be real. He showed up, he fought. It was an unfortunate mishap, but it did not have to end that way. All this publicity, all this media, the reality is I was wrong and I ain’t trying to gain no fame off of this, because I’m a martial artist.”

In his interview with MMAFighting, Chatman also explained that he hopes he didn’t give the sport of MMA a bad name with his strange post-fight maneuver.

“I know that after this happened a lot of MMA guys might be upset, because I’m giving them a bad name for people who are not even familiar with mixed marital arts,” Chatman said. “Someone who doesn’t even watch mixed martial arts might turn on the television and see this and then think, ‘This is how these cage fighters are.’”

What did you think of Drew Chatman’s bizarre post-fight celebration at LFA 36?