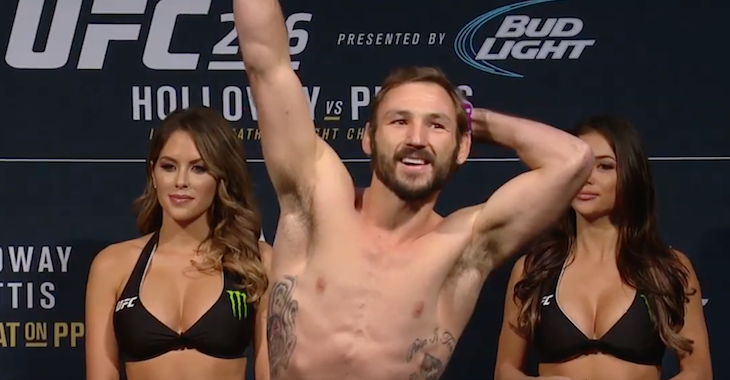 ‘Groovy’ Lando Vannata may only have two fights in the UFC, however the New Jersey native has an extremely loyal fan-base, which has only grown over the course of 2016.

In the middle of the year, TUF winner Michael Chiesa was forced out of his scheduled ‘UFC Fight Night: Sioux Falls’ scrap with top ranked lightweight Tony Ferguson. On short notice, Vannata stepped in against the #2 ranked lightweight in the world. To make the situation even more impressive Vannata put on a spectacular show against Ferguson in a back-and-forth fight which he ultimately lost via submission. Despite that, the promotion awarded both men with ‘Fight of the Night’ honors for the thrilling scrap. Earlier this month, ‘Groovy’ Lando returned to the Octagon once again, where he picked up arguably one of the best KOs of the year when he put John Makdessi to sleep with a perfectly placed wheel kick at UFC 206.

Now, Vannata will return to the Octagon once again when he steps into the cage to fight TUF 23 alum David Teymur at UFC 209 on March 4th. The UFC took to Twitter to officially announce the bout:

In David Teymur, Vannata will be facing quite an impressive striker. The 27 year old Swede may not have had a long stint on TUF 23, but he has gone 2-0 in the UFC since then. At ‘UFC Fight Night: London’ Teymur fought fellow TUF alum Martin Svensson, who he TKOd in the second round. Most recently, Teymur returned to the Octagon at ‘UFC Fight Night: Salt Lake City’, where he picked up a second round KO win over Jason Novelli. When these two strikers step into the Octagon on March 4th, who will emerge victorious? Give us your prediction below PENN Nation!