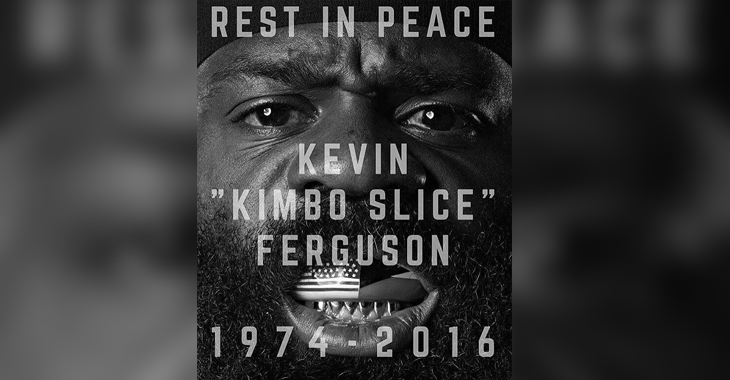 Tragic and shocking news blazed over the Internet when it became known that Kevin Ferguson, better known as Kimbo Slice, died after being admitted to a hospital in Florida late Monday.

The 42-year-old Internet sensation turned MMA star had an intimidating look and character that captivated the attention of people around the world, but the people close to him all say that he was one of the kindest souls they have ever come across.

Just a heads up everyone, please don't refer to me as the Kimbo killer any more…kinda weird now.

So sorry to Kimbo's family. My thoughts are with you In this horrible time. #RIPKimbo

Man, all I can say about @KimboSlice is that he was really a genuinely nice guy and a gentleman to everyone he dealt with in @BellatorMMA.

Thanks for the entertainment @KimboSlice RIP

My condolences go out to Kimbo's family, friends and American Top Team coaches and teammates.

"WSOF sends its thoughts & prayers to @KimboSlice’s family in their time of grief. He will be missed." @SugarRaySefo pic.twitter.com/gCt075Xb2i

#RIP #Kimbo A lot of the public probably didn't see that side of you, but those that knew you knew that good guy. pic.twitter.com/EGHTxQ236c

RIP @KimboSlice just goes to show don't waste a moment or a day without saying real things to real people who been there from day one!

RIP KIMBO SLICE. You will be missed fam.!!!

He was a larger-than-life character that truly lived the American Dream while still being down to earth and genuine. Lots of great memories over the years but I think I'll remember him most as a family man. RIP Ferg, gonna miss you boss 🙏🏽

We lost one of the good guys today at @americantopteam. Kimbo always repped us hard and always brought smiles to the faces of everyone he encountered. He will be greatly missed. RIP. #Repost @americantopteam (via @repostapp) ・・・ The ATT Family and South Florida community lost a legend today. RIP Kimbo.

I was texting with Kimbo Slice recently. At the end of our conversation he sent me this picture. He was one of my very first interviews and was so very kind to me every step of the way. Can't believe one of the most important and recognizable faces in the history of this great sport is no longer with us. Rest in peace, Ferg. Thank you for everything. You lived the American Dream and did it your way. We will miss you.

From the YouTube sensation we all couldn't get enough of to record breaking mma fights. I always wished someone told his story better, he was an AMAZING person. Genuine, funny, and a loving guy. We lost a good one in Kevin Ferguson aka Kimbo Slice we lost a good one tonight. Heart breaking.

You were an overcomer, pioneer, and Internet sensation turn MMA Icon! But more importantly you were a husband to one, father to a few, friend to more, humble to all and will be missed by millions. Love you brother! Prayers to your family, friends and Loved ones. #RIPKimboSlice @illsliceya