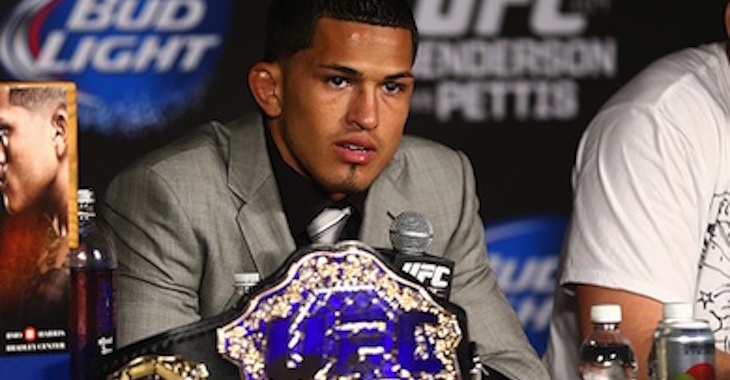 If ever there was a truly cursed fight card, it’s UFC 223. A week after Tony Ferguson withdrew from his originally scheduled main event battle with Khabib Nurmagomedov, and less than 24 hours after Conor McGregor and his cronies caused the cancellation of a whopping three scheduled fights, featherweight champ Max Holloway has been forced out of his last-minute showdown with Khabib Nurmagomedov, having been deemed medically unfit to fight.

The good news is that Khabib Nurmagomedov could still fight on the card. According to multiple reports, Anthony Pettis has been called on to step in against the undefeated Dagestani star. Pettis will first need to hit the 155-mark.

Anthony Pettis has now been called upon to fight Khabib Nurmagomedov. He has yet to weigh in. He has an hour to do so. He was left opponentless after Chiesa got cut yesterday. UFC confirms. @MMAjunkie first reported.

NYSAC announces that they deemed Max Holloway “medically unfit” to fight. No further word on Pettis.

The former UFC lightweight champion, Pettis was originally expected to fight Michael Chiesa on the main card. This plan was then nixed when Chiesa was injured in Conor McGregor’s insane attack on a fighter bus at the Barclay’s Center.

From the looks of it, this could all turn out to be a blessing in disguise for the former champion Pettis.

Stay tuned for new details on this insane situation as they emerge.