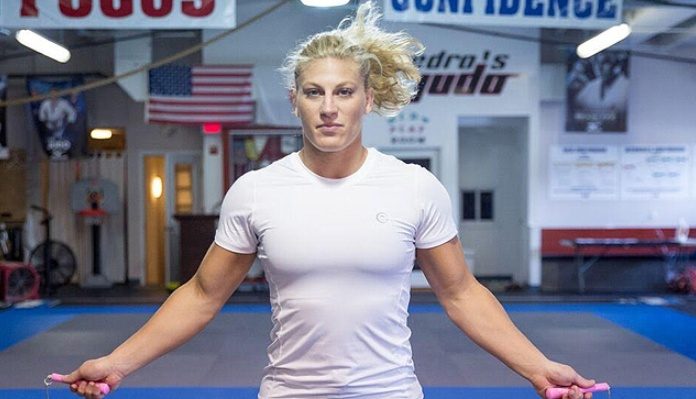 When it comes to prospects in MMA, there really aren’t any others quite like two-time Olympic gold medalist in Judo, Kayla Harrison.

Since making her MMA debut in June for the Professional Fighters League, Harrison has racked up two victories. The second being over a very seasoned and experienced veteran in Jozette Cotton last month that just showed the true potential that the PFL is dealing with here.

But it wasn’t easy finding the Judoka a second opponent at 155-pounds and that remains the task in the fight’s aftermath. Now we know the plan moving forward.

ESPN has confirmed with the PFL that next year the organization will be installing a women’s lightweight tournament that will consist of 12 fighters. Much like the men’s tournament formats that are taking place right now for their first season.

Harrison also received a contract extension along with the news.

“We’re super excited to continue working with Kayla,” said PFL president Carlos Silva. “We’re going to go ahead and add a seventh weight division to our format. It’s going to operate the same as the men’s divisions have in 2018. We thought it was a smart weight for some of these women to compete at.”

The interesting part here is that it’s well documented that the women’s featherweight division (145-pounds) is one of the thinnest if not the thinnest in all of MMA. Lightweight and above is virtually non-existent outside of the likes of a very select few. So the PFL has their work more than cut out for them.

In turn, this could very well lead to even further thinning of the 145-pound weight class. Only time will tell. Either way, Harrison finds herself in a pretty cozy spot.

“PFL has believed in me from Day 1,” Harrison said, “They’re doing amazing things with the sport. They’re creating the first 155-pound female weight class in MMA, and establishing that female fighters will have the same opportunities at winning prize money as male fighters.

I had always assumed they would want me to go down in weight, but the owners actually approached me and said, ‘Listen, we want you healthy and strong.’ I think there are girls out there who want to fight, and this sends a positive message to young girls all over the world. I don’t believe in cutting weight. There’s no reason for it.”

Of course, for Harrison, she knows that the ultimate goal is to beat the best fighter there is out there. And that happens to be the 145-pound queen, Cris Cyborg. Someone who is notoriously big for her division.

“I think next year will give me a lot of time to grow and change. By the end of next year, I’ll be 8-0, undefeated through a regular season and playoffs. I think PFL will have a great opportunity to say to Cyborg, ‘Hey, why don’t you come over here?’ We’ll have ourselves a real exciting tournament.”