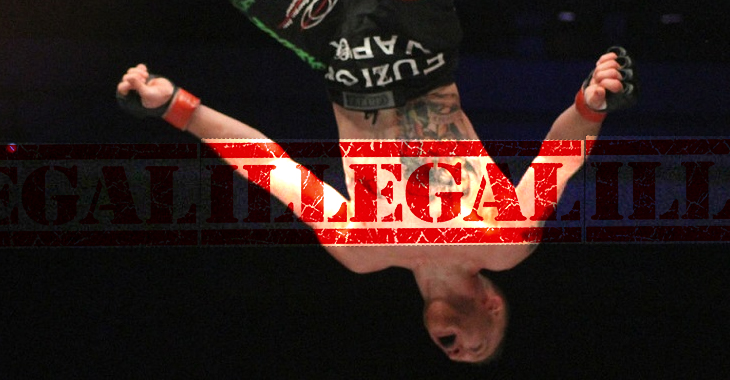 Justin Gaethje is one of the most exciting fighters on this planet, or probably any other. If you weren’t accustomed to his entertaining violence before in World Series of Fighting, you were introduced to him in his ‘Fight of the Year’ contender with Michael Johnson at UFC’s The Ultimate Fighter 25 season finale. Unfortunately, the Nevada State Athletic Commission thinks Gaethje is a little too exciting. His trademark backflip off the cage celebration has been banned. So, you won’t see him doing any acrobatic stunts if he gets a win over Eddie Alvarez.

“As a kid, I used to flip off anything. Anything and everything. My mom hated it. One time at the church, I tried to flip off a counter, and it broke and I busted my head open on the floor. I’ve been doing it off everything. I only do it when I get a sweet knockout or a sweet finish. So, I’ve done it a few times after probably eight fights. But, no more in Vegas.”

& "This is why we can't have nice things!" @Justin_Gaethje 😒 Third try was the charm, tho…ha! https://t.co/G1FLY2jGJq

Fighters can no longer climb on top of the Octagon in Vegas, and @Justin_Gaethje says he’s to blame. pic.twitter.com/XvjqJlq0q0

“Because of me, sorry guys, you’re not even allowed to get on the cage anymore, or on top of the Octagon anymore when you win in Vegas. So, sorry about that. But they let us get punched, and kicked, and kneed in the face, and then we can’t jump on the damn cage.” — Justin Gaethje speaking to UFC on FOX

You can probably see the NSAC’s point. After all, Gaethje did fall multiple times trying to do the flip. Then again, you can probably see his point too. The funny thing is, this isn’t the first time at all that Justin Gaethje has gotten into some trouble for his backflip. Back in WSOF, he was ‘suspended indefinitely’ after being told not to do his patented flip, but did it anyway. His suspension lasted only one day.