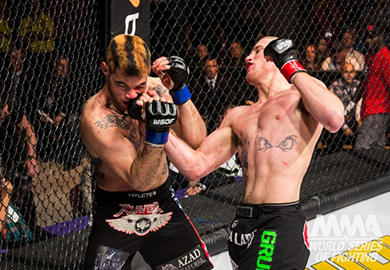 Hopefully, you knew of Justin Gaethje before he stepped foot into the UFC. If you didn’t, chances are you’ve seen his ‘Fight of the Year’ candidate with Michael Johnson back in July. This wild man has somehow remained undefeated (18-0 with 16 finishes!) while simultaneously being one of the most exciting fighters alive. If he keeps this up, things are really going to get interesting. He’s looking to earn a fight with ‘crazy’ Conor McGregor, but first he’s got to get through Eddie Alvarez.

“I think it’s a great match-up for me. I’m much more athletic, faster, [Eddie Alvarez] is getting older and he’s getting up there at the end of his career — that’s fact. I think my leg kicks are going to be very detrimental to his lead leg. I’m working at just getting better every day and I’m ready to fight Eddie Alvarez. I’ve been watching him since I was in high school, I was a fan of him, been a fan forever and I’m still a fan of his. I’m excited to get punched in the face by him.”

"It's going to be a brutal fight."@Justin_Gaethje explains his thoughts on being asked to coach and facing off against @EAlvarezFight! pic.twitter.com/Ap7V0GzBsF

“He’s got a ton of experience and he’s got a ton more experience out there, especially with that fight with Conor McGregor, it’s not like he’s going to be nervous walking to the cage to fight me. […] Fighting Eddie Alvarez does it for me. It’s something that I came to do as far as the challenge that he brings to the table.  He’s a former champion and he’s just fought Conor McGregor. So yeah, the opportunity I have is great, but it would’ve been great to fight for that interim title, but time is on my side right now.” – Justin Gaethje on the UFC Unfiltered podcast.

How can anyone not like this guy? Obviously the UFC has taken an interest in him, the 26th season of The Ultimate Fighter just debuted last night with Justin Gaethje coaching opposite Alvarez. They’ll fight each other on December 1st for the TUF 26 season finale. It looks like it will be a big fight weekend, the finale is on Friday and UFC 218 is the next day on Saturday.