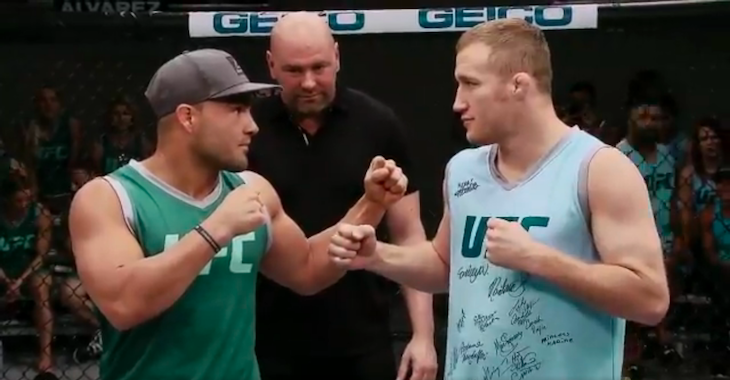 Last night, the UFC touched down in Detroit, Michigan with UFC 218. One of the highlights of this action-packed card, which was easily one of the best of the year, was Eddie Alvarez and Justin Gaethje’s lightweight slobber-knocker.

Though Gaethje certainly had his moments in this fight, he wound up losing in the third when Alvarez landed a rocket-fuelled knee on his chin. This loss is not only Gaethje’s first in the UFC’s Octagon, but his first ever, period.

While this loss, which marks the end of an 18-fight streak, has got to sting, Gaethje seems to be taking it in stride. The fan favorite lightweight and former World Series of Fighting champ took to Twitter post-fight to issue a quick and classy statement.

Congrats @Ealvarezfight thank you for the dance. That was fun. Win or lose, this hurts.

“Congrats Eddie Alvarez,” Gaethje said. “Thank you for the dance. That was fun. Win or lose, this hurts.”

Prior to this loss, Gaethje debuted in the UFC’s Octagon with a thrilling stoppage defeat of the ever dangerous Michael Johnson. Other highlights of his resume include riveting wins over Luiz Firmino, Brian Foster, Luis Palomino (twice), Melvin Guillard, Dan Lauzon, Gesias Cavalcante and Drew Fickett.

Alvarez, meanwhile, last fought in May when he battled Dustin Poirier to a disappointing no contest. In his next most recent fight, he surrendered the UFC lightweight title to current champion Conor McGregor, losing by second-round knockout.