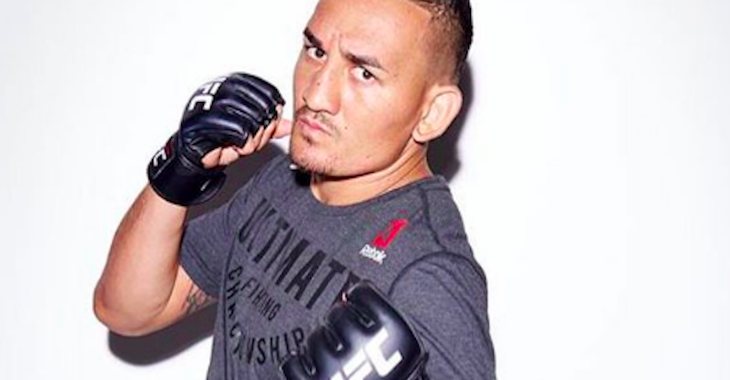 While this was a fantastic victory for Holloway, he did appear to endure a pretty rough cut down to the featherweight division’s 145-pound limit. Speaking at the UFC 218 post-fight press conference, the champ acknowledged this rough cut, and admitted that we could see him win titles in heavier divisions in the future. In fact, he hopes to win titles in many, many of the UFC’s toughest divisions.

“The only thing that’s going to stop me is medically, or I can’t make the weight,” Holloway said (h/t MMAJunkie.com). “I’m not going to force my body to do something it doesn’t want to. I’ll go up to 155. I was talking to Michael Bisping and them on the (FS1 post-fight) show, and Michael was like, ‘Can you win another title?’ … I was like, ‘Michael, you’re cutting Maxi Baby short.’ Us Hawaiians love to eat. I want to go for four titles – (155), 170, 185. I might even be at heavyweight one day. You guys know our eating habits are bad in Hawaii. One day I might make history.

That said, Holloway’s focus remains the featherweight belt for now.

“This is what champions do,” he said. “Champions defend. You’re not a champion until you defend your title. I always want to bring stability (to the division). I want to prove to people, if you want to be a champion, this is how you do it. It took me 10 fights to get an interim belt and 11 to get the undisputed. I don’t want anybody else to go through that. I want to be like (Demetrious Johnson), the guys pop up and you get sent down to the bottom of the barrel, brother. Keep trying to catch up.”

Do you think Max Holloway can win titles in four divisions?