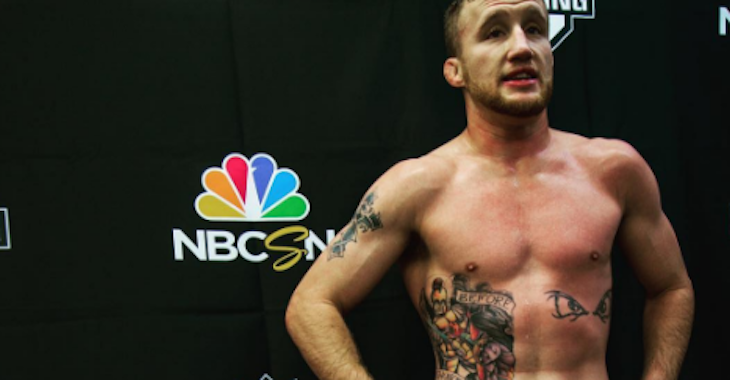 Though Conor McGregor lost his Saturday night boxing match with Floyd Mayweather Jr., succumbing to 10th-round punches, the fight itself was a resounding success for him. Not only did he he dazzle his doubters by performing far better than expected, but he’s also likely to pocket far north of $100 million once his portion of the fight’s 6-million-plus pay-per-view sales are factored in. Yes, even in defeat, McGregor’s battle with Mayweather pushed him to new and unprecedented heights.

As such, it’s going to take a special, special opponent to coax him back into the UFC’s Octagon. Former World Series of Fighting lightweight champ and current UFC standout Justin Gaethje plans to establish himself as that special opponent the only way he knows how: with extreme violence.

“McGregor, when he comes back, he’s gonna pick whoever he wants,” Gaethje said at a Wednesday media lunch (via MMAFighting.com). “As the competitor that I see him being, he’s gonna want the most dangerous guy. When I finish [my next opponent] Eddie Alvarez quickly, that’s gonna be me.”

“On paper and on TV, I’m the most dangerous, violent guy in this division,” he continued. “Most hittable guy. So that’s probably someone he’d want to fight. As long as I knock out Eddie Alvarez quickly, that’s my goal — to get that fight.”

Gaethje then shared his opinion that McGregor will probably not be excited about a fight with the winner of Tony Ferguson and Kevin Lee, who battle for interim lightweight gold at UFC 216. In fact, he doesn’t even think McGregor cares about his lightweight title.

“[McGregor] has to come back and he’s not gonna want to fight Tony Ferguson or Kevin Lee,” Gaethje said. “Being the crazy person I am, Eddie Alvarez and Conor make me nervous and make me lose sleep at night. I don’t lose any sleep when I think about Tony Ferguson or Kevin Lee. Not saying they can’t beat me or wouldn’t beat me. They just don’t do it for me. I would want someone who did it for me. It would be Khabib [Nurmagomedov] or Conor. I would love to go to Ireland.”

Do you want to see Conor McGregor and Justin Gaethje collide in a grisly display of ultraviolence?