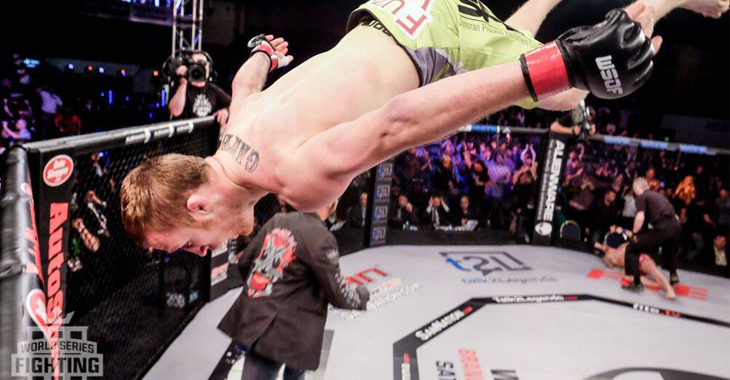 This Friday, in the main event of the Ultimate Fighter 25 Finale, former World Series of Fighting lightweight champion Justin Gaethje will make his anticipated debut in the UFC’s Octagon. The undefeated debutant will do so against the UFC’s sixth-ranked lightweight contender, Michael Johnson.

If things had unfolded just a little bit differently, of course, Gaethje could have gone the way of other free agents like Rory MacDonald, Ryan Bader and Roy Nelson, and signed with the ever-growing Bellator MMA.

Though he ultimately landed in the UFC, Gaethje did negotiate with Bellator.

“This is America, man. You’ve got to negotiate,” he explained MMAjunkie Radio. “As soon as I was a free agent I was a little nervous.”

While Gaethje says he had some good talks with Bellator, he explained that it was the promise of tougher opposition that drew him to the UFC. So long as the payday worked too, he knew this is wear he wanted to sign.

“Hindsight, of course, I knew I was going to get a chance to fight Michael Johnson or somebody in the top five, top six,” Gaethje said. “As long as the money matched up, I knew that’s what I wanted to do.”

“I give Bellator respect. They wanted me, and they respectfully came and tried to do it,” he said. “We talked a couple times. I like those guys over there. I have nothing but respect for them.”

Gaethje went 10-0 in the WSOF cage, and will enter his bout with Johnson with a sterling 17-0 overall record. A whopping 14 of the wrestler’s 17 pro wins have come by way of knockout, while one has come via submission, and just two have required the judges.

Should Gaethje defeat Johnson, he will undoubtedly be just a win or two away from a UFC lightweight title shot.

How do you think Justin Gaethje will do in the UFC?